A copper mine was hit by a tremor and a cave-in.

Monika Scislowska
A view of the entrance to the Rudna copper mine with a miners flag at half-staff, in Polkowice, Poland, Wednesday, Nov. 30, 2016. The mine was hit by a tremor and cave-in, killing five miners and three are missing.
AP Photo/str

WARSAW, Poland (AP) — Rescue teams on Wednesday found the body of a fifth miner and kept up the search for the three others still missing after a Polish copper mine was hit by a tremor and a cave-in, the mine's director said.

Director Pawel Markowski said the fifth victim was an experienced 50-year-old operator of heavy machinery and the victims ranged in age from 23 to 50. Rescuers were continuing to search underground for the missing miners, using bare hands and light equipment in difficult conditions, he said.

Five other miners have been hospitalized but their lives are not in danger and a few others escaped unscathed.

The tremor occurred shortly after 9 p.m. Tuesday some 1,100 meters (3,610 feet) underground in the Rudna mine in the southwestern Polish town of Polkowice. The German Research Center for Geosciences reported a magnitude-4.5 shallow earthquake in the region at the time of the cave-in.

Mining authorities have opened an investigation into the cave-in.

Rudna is Europe's largest copper ore mine, and one of the biggest in the world, with output capacity of 12 million tons of ore a year. Spokeswoman Jolanta Piatek said work continued in other areas of the mine, which is operated by the KGHM Polska Miedz, or Polish Copper Company.

Prime Minister Beata Szydlo, a miner's daughter, visited the mine Wednesday, offering support for the victims' families and expressed hope that the missing will be rescued. Health Minister Konstanty Radziwill visited the hospitalized miners, confirming they were in satisfactory condition.

Poland's lawmakers observed a minute of silence and prayed for the victims. President Andrzej Duda extended his condolences to the miners' families and pledged state support for them.

Piatek said the accident Tuesday brings to 15 the number of fatalities at KGHM facilities this year, 13 of them in copper mines and two in copper mills.

In 2013, 19 miners were trapped in the Rudna mine following a local tremor and a cave-in but they were rescued with no major injuries.

Known as the Polish State Mining and Metallurgical Combine under communism, KGHM went through restructuring and partial privatization in 1991 as Poland shifted to a market economy. It has grown to be one of the world's major copper and silver producers. It also has mines in Chile, Canada and the United States. 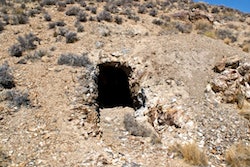