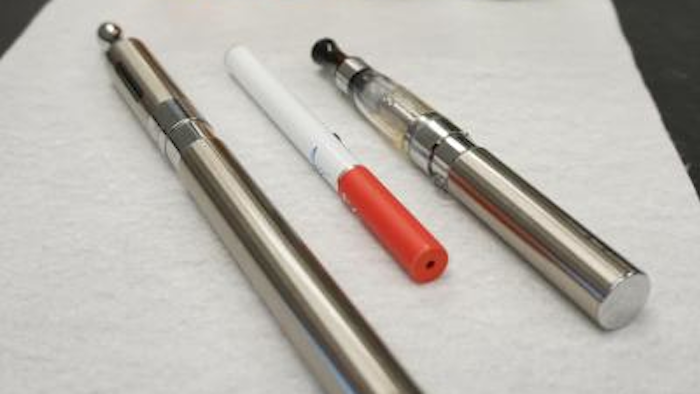 Building on more than 30 years of air quality research in some of the most polluted urban environments on Earth, a team of atmospheric scientists at the Desert Research Institute (DRI) have turned their attention toward the growing e-cigarette industry and the unidentified effects of vaping on human health.

The study "Flavoring compounds dominate toxic aldehyde production during e-cigarette vaping" confirms that these toxic aldehydes, such as formaldehyde, are formed not by evaporation, but rather during the chemical breakdown of the flavored e-liquid during the rapid heating process (pyrolysis) that occurs inside e-cigarettes or electronic nicotine delivery systems (ENDS).

"How these flavoring compounds in e-cigarette liquids affect the chemical composition and toxicity of the vapor that e-cigarettes produce is practically unknown," explained Andrey Khylstov, Ph.D., an associate research professor of atmospheric sciences at DRI. "Our results show that production of toxic aldehydes is exponentially dependent on the concentration of flavoring compounds."

E-cigarette liquids have been marketed in nearly 8,000 different flavors, according to a 2014 report from the World Health Organization. Recent reports have shown that many flavors, such as Gummy Bear, Tutti Fruitty, Bubble Gum, etc., were found to be especially appealing to adolescents and young adults.

The U.S. Food and Drug Administration (FDA) reports that 16-percent of high school and 5.3-percent of middle school students were current users of e-cigarettes in 2015, making e-cigarettes the most commonly used tobacco product among youth for the second consecutive year. In 2014, 12.6-percent of U.S. adults had ever tried an e-cigarette, and about 3.7-percent of adults used e-cigarettes daily or some days.

Khylstov and his colleagues measured concentrations of 12 aldehydes in aerosols produced by three common e-cigarette devices. To determine whether the flavoring additives affected aldehyde production during vaping, five flavored e-liquids were tested in each device. In addition, two unflavored e-liquids were also tested.

"To determine the specific role of the flavoring compounds we fixed all important parameters that could affect aldehyde production and varied only the type and concentration of flavors," explained Vera Samburova, Ph.D., an assistant research professor of chemistry at DRI.

Samburova added that the devices used in the study represented three of the most common types of e-cigarettes - bottom and top coil clearomizers, and a cartomizer.

The study avoided any variation in puff topography (e.g., puff volume, puff velocity, interval between puffs) by utilizing a controlled sampling system that simulated the most common vaping conditions. E-cigarette vapor was produced from each device by a four-second, 40-ml controlled puff, with 30-second resting periods between puffs. The e-cigarette devices were manually operated to replicate real-life conditions and all samples were collected in triplicate to verify and confirm results. Specific care was taken to avoid "dry puff" conditions.

To provide further proof that the flavoring compounds, not the carrier e-liquid solvents (most commonly propylene glycol and/or vegetable glycerin) dominated production of aldehydes during vaping, the authors performed a series of experiments in which a test flavored e-liquid was diluted with different amounts of the unflavored e-liquid. Liquids with higher flavor content produced larger amounts of aldehydes due to pyrolysis of the flavoring compounds.

In all experiments, the amount of aldehydes produced by the flavored e-cigarette liquids exceeded the American Conference of Governmental Industrial Hygienists Threshold Limit Values (TLVs) for hazardous chemical exposure.

"One puff of any of the flavored e-liquids that we tested exposes the smoker to unacceptably dangerous levels of these aldehydes, most of which originates from thermal decomposition of the flavoring compounds," said Khylstov. "These results demonstrate the need for further, thorough investigations of the effects of flavoring additives on the formation of aldehydes and other toxic compounds in e-cigarette vapors."