The large pipeline exploded Monday while a crew was making repairs. 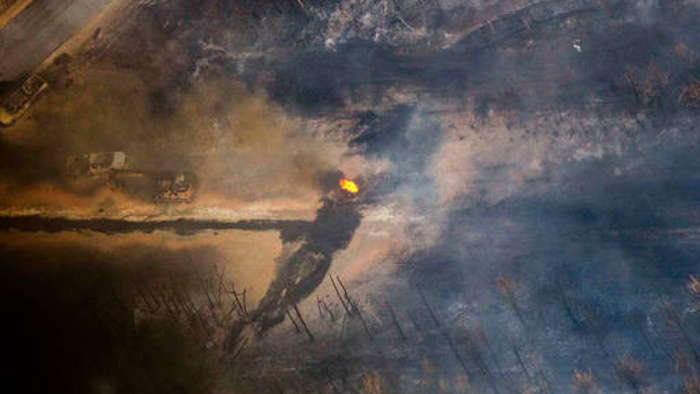 A flame continues to burn after a Monday explosion of a Colonial Pipeline, Tuesday, Nov. 1, 2016, in Helena, Ala. The blast, which sent flames and thick black smoke soaring over the forest, happened about a mile west of where the pipeline ruptured in September, Gov. Robert Bentley said in a statement.
AP Photo/Brynn Anderson

BIRMINGHAM, Ala. (AP) — Workers have made "substantial progress" excavating a pipeline that exploded and burned in central Alabama earlier this week, killing one person and injuring five, even though a small fire continued Thursday, the pipeline company said.

Colonial Pipeline Co. said the digging began Wednesday night at the site, located about 25 miles southwest of Birmingham, Alabama. The remaining small fire eventually will be extinguished and any remaining fuel will be drained, a company statement said.

The large pipeline, which transports gasoline from the Gulf Coast to New York City, exploded Monday while a crew was making repairs related to a September gas spill. One person was killed, and four people who were injured remain hospitalized.

The company has said the pipeline could reopen as early as this weekend, easing worries about gasoline shortages or price increases, but it didn't give an updated timetable on the resumption.

An inspection showed a nearby pipeline which carries diesel, jet fuel and other products wasn't damaged in the explosion, Colonial said, and testing showed no fuel in the Cahaba River, about a mile from the explosion, or a creek which feeds the river.

David Butler, an environmentalist who works with Cahaba Riverkeeper and has been involved with the emergency response, said the severe drought conditions in central Alabama likely prevented the accident from doing worse damage.

"You're not often thankful for no rain, but in this particular incident it has been fantastic," Butler said. "It has given them an opportunity to clean up, and rain would only carry (fuel) to the river."

Officials have said the explosion occurred while a nine-person crew was working on the pipeline as part of repairs related to a pipeline spill that occurred in September. Anthony Lee Willingham, 48, of Heflin, Alabama died in the blast, said Shelby County deputy coroner Lina Evans.

Government officials and Colonial Pipeline have said a piece of excavation equipment hit the pipeline, causing the explosion, but further details haven't been released.

One of Willingham's daughters told WSFA-TV her father was a welder and heavy machinery worker for L.E. Bell Construction of Heflin.

Congressional Democrats have asked for a federal investigation of Colonial Pipeline, and the Waterkeeper Alliance, which includes Cahaba Riverkeeper, said the explosion was the sixth incident involving the company's pipeline this year in the state.

"It is time for spills, leaks, and accidents from the Colonial pipeline to end in Alabama. We cannot afford to continue playing Russian Roulette with lives and our drinking water," the organization said in a statement.

The company has defended its operations, saying in a statement: "We have robust system integrity, inspection and maintenance programs that meet or exceed all federal regulatory requirements."

This story has been changed to clarify the location of the explosion in Shelby County, Alabama.