In 2015 alone, 93 suicides and attempted suicides were officially recognized as overwork deaths, and 96 deaths from heart attacks, strokes and other illnesses were linked to overwork. 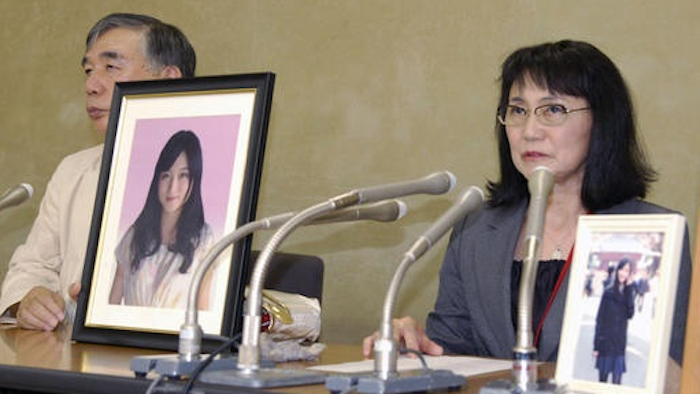 Yukimi Takahashi, right, mother of Matsuri, with lawyer Hiroshi Kawahito, speaks to journalists at a news conference in Tokyo after her daughter's suicide was recognized as “karoshi,” or death from overwork. Matsuri Takahashi’s dream career at Japan’s top ad agency, Dentsu, ended with her suicide after her overtime exceeded 100 hours a month.
Kyodo News via AP

"I'm emotionless and only wish to sleep," she wrote, exhausted and depressed, in a Twitter post in October 2015, six months after starting the job. On Christmas day, the 24-year-old leaped from a dormitory balcony, leaving behind a last email to her mother saying her work and life had become unbearable.

Takahashi's was not the first "karoshi," or death from overwork at Dentsu, a company notorious for demanding long hours from its employees.

Despite efforts over the past two decades to cut back on overwork, karoshi still causes hundreds of deaths and illnesses every year in Japan, affecting all sorts of workers, from elite "salary-man and career-woman" employees like Takahashi to IT technicians and manual laborers.

In August 2015, labor authorities caught Dentsu exceeding its own 70 hour monthly maximum overtime limit and ordered it to cut back.

Asked for comment, Dentsu said that as of October 2015, nobody was reporting overtime exceeding 70 hours. It now limits overtime to 50 hours a month. "We will keep trying to manage work appropriately, to curb long hours of work and maintain employees' health," Dentsu told The Associated Press in a statement.

But at Dentsu and many other companies, much overtime goes unreported, labor officials say.

On top of the 40-hour work week the Labor Standards Law sets for most workers, as an exception that serves as a loophole companies can establish voluntary ceilings for overtime. That make the law toothless, experts say.

In Japan's male-dominated, hierarchical corporate world, company interests tend to come first. Employees, especially young, foreign or female workers, are ill-placed to resist pressure from higher-ups to work extra-long hours or take on too much work. Older workers who retire from permanent positions with full benefits often are replaced by part-timers or chronically overworked contractors who likewise have little leverage and no union representation.

"Overtime is supposed to be for unanticipated occasions, but in Japan, it's become expected as part of daily duties that nobody can refuse," said Kansai University professor Koji Morioka, an expert on labor issues. "People are chronically working long hours because they have too much work to do as staff sizes have shrunk."

Takahashi's case became public after the government recently recognized her suicide as "karoshi."

"I'm on duty again Saturday-Sunday. I just want to die," she tweeted in November 2015. By December she was getting only two hours of sleep a day.

Asked during parliamentary questioning about Takahashi's death, the third officially acknowledged case of "karoshi" at Dentsu, Minister of Health, Labor and Welfare Yasuhisa Shiozaki threatened harsh action against the company, which dominates advertising for both companies and the government.

"It is extremely regrettable that the lesson was not learned and yet another young employee ended up committing suicide at the same company because of long working hours," he said.

There is growing recognition that efforts to curb overwork are failing and that the pressure increasingly is affecting younger workers, said Emiko Teranishi, who founded a group for karoshi victims' families after her husband, a chef, died of overwork.

A survey of 10,000 companies published in Japan's first white paper on karoshi, released this month, found that overtime at more than 20 percent exceeded the 80 hour per month threshold for overwork.

In 2015 alone, 93 suicides and attempted suicides were officially recognized as overwork deaths and eligible for compensation and 96 deaths from heart attacks, strokes and other illnesses were linked to overwork, it said. It listed 1,515 cases of workers or families seeking compensation for overwork-related mental problems.

More than half of Japanese workers give up taking paid vacations, while more than one in five Japanese work an average of 49 hours or longer each week, compared to 16.4 percent in the U.S., 12.5 percent in Britain and 10.1 percent in Germany.

Many Japanese karoshi victims were men in their 30s and 40s in managerial positions entailing no legal limits on overtime.

That includes a 40-year-old nuclear engineer at Kansai Electric Power in Tsuruga, western Japan, who hanged himself in April. Regulators found he had logged up to 200 hours of overtime a month.

Highlighting another lapse in oversight, workers in Japan's vocational training programs for foreign workers are among the most vulnerable.

A 27-year-old Philippine man, Joey Tocnang, died of heart failure in April 2014 while participating in a government-sponsored training program at a die-casting factory in central Japan's Gifu prefecture. His monthly overtime exceeding 120 hours was recognized as the cause of his death just months before he was due to finish the three-year program.

Growing official recognition seems not to have altered the tendency for long hours to trump work-life balance.

Dentsu's taxing regime has persisted since the lean years just after World War II, when then-company president Hideo Yoshida, dubbed the "demon of advertising" devised his "10 rules of work."

At the top of the list: "Create work for yourself; don't wait for work to be assigned to you." Another says, "Never give up, even if you might be killed."

A landmark Supreme Court decision in 2003 recognized the 1991 suicide of a 24-year-old Dentsu radio advertising worker as karoshi. A 30-year-old Dentsu employee who died of illness three years ago also was recognized as an overwork victim.

"Someone tell me why my daughter had to die," Takahashi's mother Yukimi said after winning an undisclosed amount of compensation for her daughter, whose name means "Festival."

"I wish someone had taken steps sooner when she was still alive."