Orbital ATK was poised to fly its Antares rocket with a load of supplies for the International Space Station, after being grounded for two years. 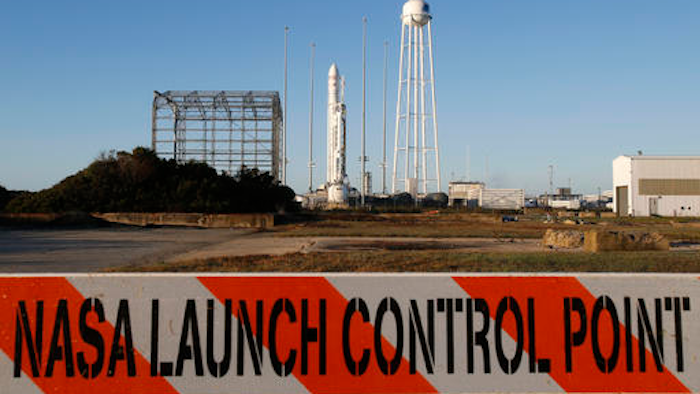 A barricade warns visitors as workers do final preparations for the launch of Orbital ATK Antares rocket at the NASA Wallops Island flight facility in Wallops Island, Va., Sunday, Oct. 16, 2016. A bad cable delayed a rocket launch from Virginia on Sunday by a NASA shipper eager to make a strong comeback.
AP Photo/Steve Helber

CAPE CANAVERAL, Fla. (AP) — A bad cable delayed a rocket launch from Virginia on Sunday by a NASA shipper eager to make a strong comeback.

Orbital ATK was poised to fly its Antares rocket with a load of supplies for the International Space Station, after being grounded for two years. But seven hours before the planned liftoff, NASA announced the flight was off until Monday night.

The cable — part of ground support equipment at the Wallops Island launch complex — will be replaced.

This will be the first launch of the unmanned Antares rocket since one exploded shortly after liftoff in October 2014 on a station supply run for NASA. Orbital ATK replaced the Russian-built engines and made other changes to the rocket. In addition, the launch pad had to be rebuilt.

NASA is paying Orbital ATK as well as the SpaceX company to deliver cargo to the station. SpaceX is currently grounded, meanwhile, because of a launch pad explosion last month.

If the Cygnus supply ship launches Monday, it likely would hang out in orbit for several days before arriving at the space station. That's because of a crew launch from Kazakhstan on Wednesday, which takes priority. Three astronauts will join the three already at the orbiting outpost.

The Cygnus — named after the swan constellation — has the ability to loiter in orbit for a few weeks, even a month if necessary, before joining the space station.

Monday's liftoff would be at 7:40 p.m. Weather permitting, the launch should be visible along much of the East Coast, including Washington, New York and Boston.