Millions of gallons of contaminated water have already drained into the main drinking-water aquifer. 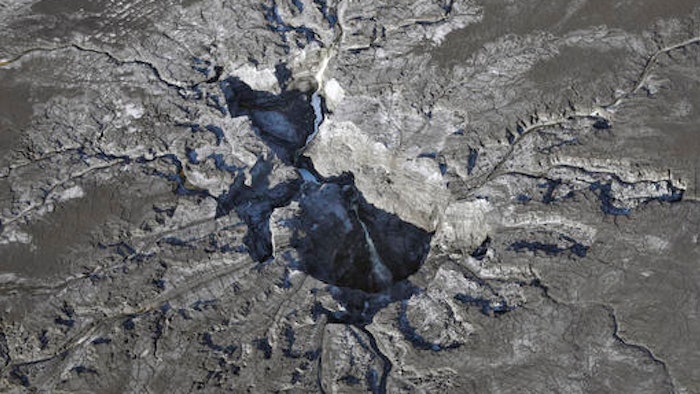 Water continues to flow into a large sinkhole on the Mosaic Co. property shown in this aerial photo Thursday, Sept. 29, 2016, in Mulberry, Fla. Neighbors of the huge sinkhole sending cascades of contaminated water and fertilizer plant waste into Florida's main drinking-water aquifer are fearful and fuming that it took weeks for them to be notified about the disaster. Many are still waiting anxiously for results from tests for radiation and toxic chemicals in their well water.
AP Photo/Chris O'Meara

GAINESVILLE, Fla. (AP) — Hurricane Matthew's heavy rains are predicted to soak much of Florida, and that could complicate efforts to manage the pollution flowing into a sinkhole that opened up beneath a fertilizer plant's massive pile of toxic waste.

The plant's owner, Mosaic Co., is pumping out water through a well while preparing to plug the huge hole under one of its gypsum stacks. But millions of gallons of contaminated water have already drained into Florida's main drinking-water aquifer.

So far, the company and state environmental officials say no contamination has migrated off Mosaic's property. The company says test results on 260 private wells have shown contaminant levels within legal drinking water standards. Still, more than 850 concerned neighbors want their wells tested for contaminants and radioactivity.

Here are some questions and answers about the situation.

What are gypsum stacks and why do they exist?

Mosaic and other fertilizer makers use sulfuric acid to break down phosphate rock. This creates phosphoric acid and a radioactive byproduct called phosphogypsum that contains small amounts of naturally occurring radium and uranium. The stacks also can release large concentrations of radon gas.

The U.S. Environmental Protection Agency allows a small amount of phosphogypsum with low radioactivity to be used as a soil additive in peanut farming, but the rest must not be reprocessed or used for other purposes, so it's stacked in piles as high as 500 feet that cover hundreds of acres.

How many of these gypsum stacks are there in the U.S.?

There are at least 70 gypsum stacks in the United States and about 27 in Florida; of these, about 20 are located within the sinkhole-prone region of west-central Florida, and the older ones among them are unlined, according to the USGS.

Six of the Florida stacks were actively being used last year; other active stacks are in Idaho, Louisiana, North Carolina and Wyoming.

Who make sure this waste is contained?

The industry is responsible for managing the pollution flowing from these piles during storms. Both the Florida Department of Environmental Protection and the EPA regulate the companies under the Clean Water Act. Newly constructed stacks are required to have liners underneath to keep waste from seeping into groundwater.

Mosaic settled a nearly $2 billion environmental lawsuit with the EPA last year over company-wide management of pollution, including its New Wales facility where this sinkhole formed. In the settlement, EPA cited a need for the company to prevent the release of hazardous, highly corrosive wastewater, and to improve its detection of potential leaks and spills.

Why does Florida have so much phosphate mining and fertilizer production?

More than half of the U.S. reserves of phosphate rock are found beneath Florida, which has about 63 percent of the country's production capacity, according to the U.S. Geological Survey.

The mineral is a key element of fertilizer used in commercial agriculture, and is an important building-block of the nation's food supply. "Not enough can be said about our food security and this industry," said Guerry McClellan, an emeritus professor of geology at the University of Florida. "Fertilizers and smart farmers have kept our on-table food the cheapest, percentage wise, of any country."

Have gypsum stacks leaked pollution before?

Yes. A major spill during Hurricane Frances in 2004 near Tampa Bay sent an estimated 65 million gallons of acidic waste from a gypsum stack into nearby waterways, killing thousands of fish and other marine life.

Another sinkhole in Polk County, Florida, in 1994 opened underneath a gypsum stack and sent tons of waste into the Floridan Aquifer. That hole was eventually plugged and tests on water afterward found the contamination fell to pre-accident levels quickly and never violated drinking water standards, according to a 1997 study.

Toxic waste from fertilizer production was also dumped directly into the Mississippi River in Louisiana for years until the 1972 Clean Water Act banned the practice. Later, the city of New Orleans and others had to fight to stop a renewed effort to dump such pollution into the city's chief drinking-water source. Mosaic now owns some of these polluted sites, and while it admitted no fault when settling the lawsuit with EPA, it has assumed responsibility for their environmental management.

How environmentally dangerous is the pollution from the current sinkhole?

The waste pile in Central Florida contains radioactive radium and uranium, radon gas, sulfates and other contaminants, according to the EPA. So far more than 200 million gallons of wastewater have been dumped into the Floridan Aquifer, a key drinking-water source for millions of people.

The company has found contaminants in a well being used to recover polluted water that is within a quarter mile from the hole, which means the contaminated water has reached the aquifer. The company and state officials say there is no indication that the pollution has migrated from below the company's property, but testing continues.

How will Mosaic stop the flow of water into the hole?

Plugging a sinkhole in the middle of a gypsum stack presents difficult engineering challenges, said geologist Sandy Nettles, a sinkhole expert. Mosaic announced plans to inject a concrete mixture into the "neck of the sinkhole" to plug it from above. In the 1994 sinkhole that opened beneath another gypsum stack in Florida, contractors had to shoot gravelly concrete through pipes that extended 400-feet beneath the pile to stop it up.

Mosaic said it is studying the depth and contours of the current sinkhole. Water has continued to flow across the gooey, quicksand-like waste pile and down the hole, which could complicate the effort. If this hurricane season's weather sends heavy rains to central Florida, much more contaminated water could flow through the unplugged hole.