Even after a worker suffered third-degree chemical burns from a fall into an acid-etching tank, the company still allowed employees to climb atop tanks without the proper fall protection equipment.

Just weeks after a machine operator suffered third-degree chemical burns to his left foot after falling into an acid-etching tank heated to more than 170 degrees, federal inspectors posted an imminent danger notice at A-Brite Plating when they found workers climbing atop the same acid tanks at the Cleveland auto parts plating facility.

The U.S. Department of Labor's Occupational Safety and Health Administration inspectors posted the danger notice April 1, 2016, when they arrived to initiate an inspection after learning of the worker's March 14, 2016, injury. A-Brite Plating failed to report the injury, as required.

As a result of its inspection, OSHA cited the company for one willful and eight serious safety and health violations on Sept. 9, 2016. A-Brite faces proposed penalties of $256,545.

Investigators found the 40-year-old machine operator was clearing a jam from a conveyor arm above the tank when he fell. They found he had no protection to prevent a fall, nor adequate personal protective equipment to protect him from chemical burns. His injuries have required extensive skin grafts to his left foot.

"Allowing workers to continue climbing on top of acid tanks after knowing an employee suffered a third-degree chemical burn when he fell into a tank is unconscionable," said Howard Eberts, area director of OSHA's Cleveland office. "During our investigation OSHA found the company was well aware of the dangers of falling into the tank because at least seven employees had fallen while clearing machine jams in the past five years. This life-altering injury was preventable by following basic safety procedures A-Brite needs to take immediate action to protect workers in its facility by re-evaluating its safety and health programs to ensure they are providing training, procedures and protective equipment to protect workers on the job."

A-Brite Plating is a division of Ontario, Canada-based Plasma Group, which employs about 3,800 workers at 20 global locations.

The company has 15 business days from receipt of its citations and penalties to comply, request an informal conference with OSHA's area director, or contest the findings before the independent Occupational Safety and Health Review Commission. 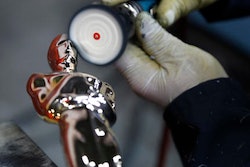