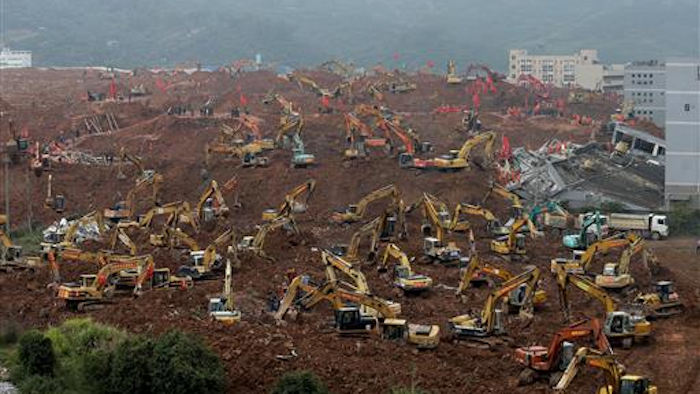 In this Tuesday, Dec. 22, 2015 file photo, rescuers search for potential survivors following a landslide at an industrial park in Shenzhen in south China's Guangdong province. China's Cabinet said Friday, July 15, 2016 that 53 people are in custody in an investigation into the landslide that killed 73 people and left four others missing last year.
AP Photo/Andy Wong, file

BEIJING (AP) — China's Cabinet said Friday that 53 people are in custody in an investigation into a landslide that killed 73 people and left four others missing in the southern city of Shenzhen last year.

The State Council's investigation report said the landslide in which a mountain of construction waste that had been piled up against a hill collapsed during heavy rains onto an industrial park was an "extraordinarily serious production safety accident."

The Dec. 20 landslide destroyed 33 buildings and resulted in "direct economic losses" of $132 million, the report said.

Shenzhen is a major manufacturing center, making everything from cellphones to cars, and it attracts workers from all parts of China.

In a rare move after the disaster, Shenzhen's top officials, including the city's Communist Party chief and its mayor, bowed deeply at a news conference to apologize.

A week after the landslide, a local government official heading the city's urban management bureau killed himself by jumping from a building.