It was the deadliest landslide on record in the continental United States. 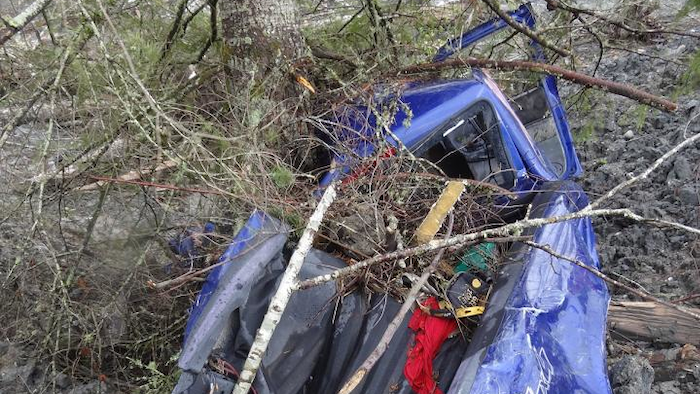 A pickup truck was plucked from its parking spot in the Steelhead neighborhood and wrapped around tree.
Tim Stark

CHAMPAIGN, Ill. -- Late in the morning of March 22, 2014, a huge chunk of land cut loose and roared down a hillside in the Stillaguamish River Valley just east of Oso, Washington, about 60 miles northeast of Seattle.

In a matter of minutes, 43 people lost their lives as a wall of mud, sand, clay, water and trees cascaded down the hillside into the Steelhead Haven neighborhood, a relatively new housing tract.

This was the deadliest landslide on record in the continental United States. A new report details the factors leading to the disaster, the hazards that accompany landslides and steps that can be taken to mitigate landslide consequences and risk in the Pacific Northwest, with the aim of preventing future tragedies.

The area has seen its share of landslides, but this one was different. It traveled much farther across the valley than any other recent slides for the site.

"Every 30 to 40 years, the area would have a small slide that would come down and block the river," University of Illinois civil and environmental engineering professor Tim Starkk said. "But the 2014 slide was like a huge squeegee pushed the prior slide debris across the valley."

Stark and his team were among the first scientists on the scene after the disaster, and it was immediately apparent to them that something different had occurred here.

"Most of the slides in this area originate from about halfway up the slope, but this flow contained sediments and vegetation from the top of the slope," Stark said, "The higher up the slope the landslide starts, the more potential energy it will have."

In their report in the Journal of Geotechnical and Geoenvironmental Engineering of the American Society of Civil Engineers, Stark and his team found that height or potential energy was the primary element responsible for the destructive force of this landslide, but noted that other observable factors were at play, as well. These include the shape of the upper slope, sediment type, precipitation and erosion.

"LIDAR (Light Detection and Ranging) imaging is a great tool for looking at these geographic factors because it gives us a view of the land from above without all of the vegetation in the way," Stark said. "It allows us to quickly spot other potential high-elevation slide hazards."

In April 2015, the state increased funding for the use of LIDAR by the Washington Department of Natural Resources to spot potential landslide hazards. Researchers hope that particular attention will be paid to these high-elevation slide areas.

"Almost all of the valleys in the area have rivers cutting into glacial plateaus with potential for other high-elevation slides," Stark said.

Another factor contributing to landslide potential is precipitation. The researchers reviewed precipitation data and found that the Oso area experienced record-breaking rainfall in the weeks leading up to the slide. Wet sediments are not as strong as dry ones, Stark said, and accounting for this detail will be an integral part of the next phase of this research, which was awarded a National Science Foundation grant.

"We are working on a new model that will help us account for soil moisture and other factors like the impact of timber harvesting on rainwater infiltration and the location of communities," Stark said. "That will help us better assess hazards and, importantly, determine the level of risk to current and future population areas."