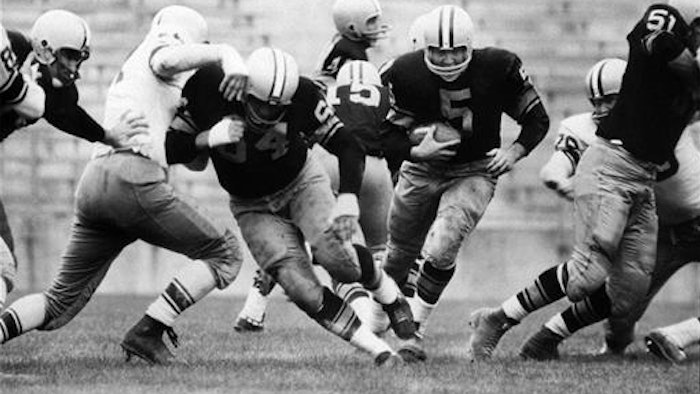 In this Aug. 10, 1959 file photo, Paul Hornung (5) of the Green Bay Packers goes through the line in an inter-squad game in Green Bay, Wis. Pro football Hall of Famer and former Heisman Trophy winner Hornung on Thursday, July 7, 2016, sued equipment manufacturer Riddell Inc., saying their football helmets that he wore during his professional career in the 1950 and ‘60s failed to protect him from brain injury.
AP Photo, File

CHICAGO (AP) — Pro Football Hall of Famer and former Heisman Trophy winner Paul Hornung sued equipment manufacturer Riddell Inc. on Thursday, saying football helmets that he wore during his professional career in the 1950s and '60s failed to protect him from brain injury.

Attorneys for the 80-year-old Hornung filed the civil lawsuit in Cook County Circuit Court in Chicago, naming the Rosemont-based company as the defendant. It seeks unspecified damages.

Hornung suffered multiple concussions as a running back for the Green Bay Packers and has been diagnosed with dementia, the lawsuit says. It said that the neurodegenerative disease has been linked to repetitive head trauma.

Concussion lawsuits from athletes have become more common in recent years amid growing awareness about the long-term consequences of repeated blows to the head and Riddell is also fighting litigation elsewhere. But suits from athletes whose playing days were as far back as the 1950s are rare.

Riddell began producing helmets out of plastic in 1939, touting them as safer alternatives to ones — more common at the time — fashioned from leather, according to the eight-page filing. Hornung, it says, wore a leather helmet when he played for Notre Dame in college but switched to the Riddell-made plastic helmets in the NFL.

One of Hornung's lawyers said Riddell knew enough about the perils of concussions more than five decades ago to warn players.

"Studies dating back to the 19th century linked head trauma to permanent brain damage, but Riddell failed to communicate the danger to Mr. Hornung," the attorney, William T. Gibbs, said in a written statement.

Hornung's wife, Angela Hornung, is also named as a plaintiff in the suit, which says she "suffered and will continue to suffer" the loss of her husband's affection and companionship as a result of his injuries.

Riddell has successfully fought some litigation. A Los Angeles jury in 2014 found that Riddell wasn't liable for the severe brain injury of a high school football player who suffered a helmet-to-helmet hit during a game.

Riddell, which provides helmets to every level of football — from the pros to Pop Warner — has said publicly previously that it has devoted enormous resources to developing equipment that can reduce the risk of a devastating head injury.