Questions linger over who set the fire, which resulted in an explosion killing 15 at the plant. 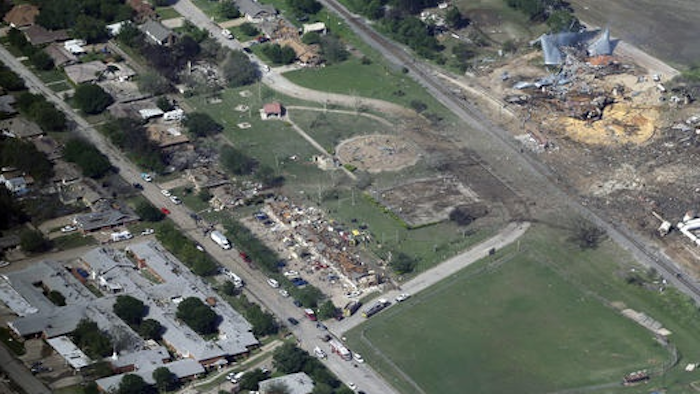 This April 18, 2013 aerial file photo shows the remains of a nursing home, left, apartment complex, center, and fertilizer plant, right, destroyed by an explosion at a fertilizer plant in West, Texas. Federal authorities announced Wednesday, May 11, 2016, that the fire that caused the deadly explosion in 2013 was a criminal act. The explosion killed 15 people, injured hundreds and left part of the small town in ruins.
AP Photo/Tony Gutierrez, File

DALLAS (AP) — One question has lingered in the Central Texas farming town of West since a fertilizer plant caught fire in 2013 and exploded, killing 15 people and damaging at least $100 million in property: What caused the blaze?

On Wednesday, federal officials came to West with an answer — and in the process cast a much different light on a catastrophe many locals thought was behind them.

"This fire was a criminal act," Robert Elder, the special agent in charge of the Alcohol, Tobacco, Firearms and Explosives' Houston office, announced during a news briefing in West.

With authorities ruling the fire at the West Fertilizer Co. building had been "intentionally set," new questions quickly emerged: Who? And why? Would someone want to bring heartache to the town of about 3,000, known statewide for its old-world Czech traditions and kolache fruit pastries?

"A few of those thoughts went through my mind," said Mary Sanders, whose son Kevin was among the 12 first responders killed. Sanders choked up as she spoke by phone, saying the ATF's news came as she and her family were "just finally coping" with his death.

Law enforcement experts said a suspect's intent could be important as prosecutors decide whether to pursue arson, murder or domestic terrorism charges. Intent also could play a role in sentencing, should the government proceed with a case and win.

Elder declined Wednesday to discuss specifics about suspects, possible charges or motive for the April 17, 2013, incident, one of Texas' deadliest industrial disasters. But agents were "headed in the right direction," he said, and hoped a new $50,000 reward would "get us across that finish line."

Elder said the investigation had in recent months eliminated two other potential causes that remained — faulty electronic wiring at the building and a short-circuiting golf cart. The probe cost $2 million and included more than 400 interviews, a fire-scene examination and "extensive scientific testing" at an ATF fire research laboratory.

"Why the fire was set, I don't know," Elder said. "Hopefully when we arrest the person or persons responsible, they'll tell us."

Matt Orwig, the former U.S. attorney for the Eastern District of Texas, said whatever the motive and charges, anyone convicted probably faces at least life imprisonment.

"What this person has done is commit mass murder by turning that building and its contents into a weapon of mass destruction," Orwig said.

Federal reports estimated that the West Fertilizer Co. had a supply of 40 to 60 tons of ammonium nitrate, a popular agricultural fertilizer that can be explosive under certain conditions.

Across the world, ammonium nitrate fertilizer has been faulted in other deadly accidents. It has also been mixed with fuel oil and used in attacks, including the deadly 1995 bombing of Oklahoma City's federal building. Some countries have banned the fertilizer or restricted its use.

The ammonium nitrate in West detonated after the fire had raged for about 20 minutes, investigators previously found. The blast left a crater 90 feet wide and at least 10 feet deep, and sent debris as far as 2 miles away. A federal report noted that the plant was about 550 feet from the closest school, which sustained catastrophic damage but was not in session at the time.

A volunteer West paramedic was later accused of collecting materials for an explosive device. Bryce Reed pleaded guilty to federal charges and served time in prison. Authorities have never blamed Reed for the plant explosion, and Elder on Wednesday said he's not a suspect in the ongoing investigation.

Investigating a complex explosion scene like West requires time and extensive scientific lab work, said Mike Bouchard, a retired assistant director for ATF field operations who supervised the Sept. 11 attack on the Pentagon. But that alone wouldn't explain why it took the ATF, assisted by other federal and state agencies, three years to determine the fire was intentionally set, Bouchard said.

"It's highly likely some new information came to light that would cause them to now come out and say it was a criminal act," he said. "They wouldn't make that statement unless they had some evidence to prove that. You can't just say, 'It has to be this,' because you've ruled out everything else."

Bouchard added that the reward is an indication "they're looking for some additional information to help them prove a case." Money might be the incentive for someone "to tell what they know," he said.

Orwig, the former U.S. attorney, said the decision to go public signals the highest levels of the Justice Department believe there is "strong evidence to support what they're saying occurred."

"That's not saying they have enough currently for a conviction or even to take it to a grand jury," Orwig said. "But what it does mean is, they believe they have enough to responsibly make that statement."

For Sanders and others who lost a loved one in the disaster, the announcement brought back raw emotions. She's unsure what to think about a criminal investigation that will drag on.

"I don't know that I would really want to pursue something a little bit more," she said. "We just have to accept this has happened and really move forward. If further investigation down the line brings more to light, we'll have to deal with it further."