Search and rescue teams dug through the rubble searching for any other possible victims. None were found. 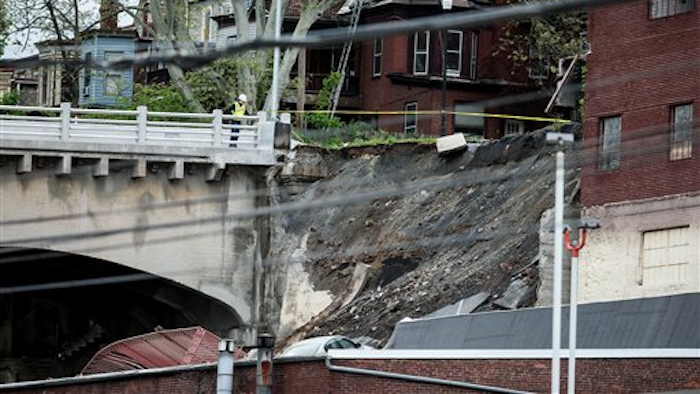 A member of emergency crews looks at a collapsed retaining wall of the Mulberry Street bridge in Harrisburg, Pa., Thursday, May 5, 2016.
Sean Simmers/PennLive.com via AP

The ground supporting the wall adjacent to the Mulberry Street Bridge gave way Thursday afternoon in the state capital of Harrisburg.

Firefighters were training near the bridge at the time of the collapse.

"They witnessed a car cascading down off of the parking lot," said Harrisburg Fire Chief Brian Enterline.

The car crashed through the roof of a tire warehouse.

"You'll see there is a car on top of the rubble pile. That car was checked. There are no victims in that car," Enterline said. "And we believe that is the only car that was on that surface lot at the time."

Search and rescue teams dug through the rubble searching for any other possible victims. None were found.

"The area is frequented by homeless so we want to make sure that we have everybody accounted for in the area," Enterline said.

The Pennsylvania Department of Transportation owns the bridge. PennDOT officials told Pennlive.com late Thursday that while the structural integrity of the bridge remains intact, there is concern about the stability of the ground next to the roadway approach to the bridge.

PennDOT said the bridge will remain closed until further notice. An inspection team will return Friday morning to make a more thorough evaluation.

The cause of the collapse is still under investigation.