Maine Sen. Peter Edgecomb said he feared a law being pushed by food sovereignty supporters could open the doors for a food contamination incident that could scare consumers away from the state's small farms. 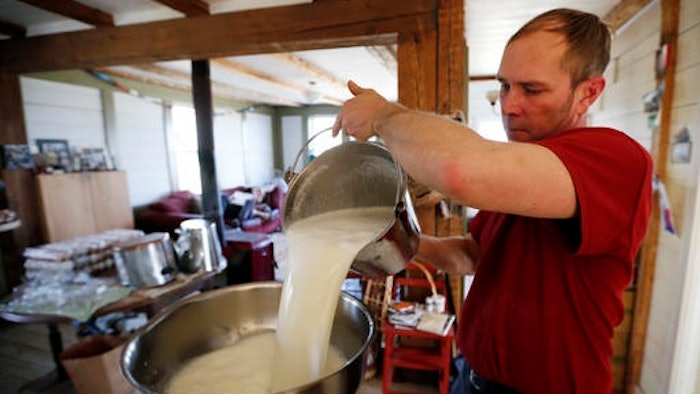 Phil Retberg pours a pail of milk that will be made into cheese in the family kitchen at the Quill's End Farm in Penobscot, Maine. Retberg said the food sovereignty movement is about protecting community as much as it's about protecting farms.
AP Photo/Robert F. Bukaty

PENOBSCOT, Maine (AP) — Heather and Phil Retberg's Quill's End Farm is idyllic to the point of New England cliche. Dairy cows, milked by hand, share space with goats and ducks near a wooden barn that overlooks a rolling green field and the summit of nearby Blue Hill.

The farm is a way of life Heather Retberg said needs to be protected from an aggressive regulatory structure that keeps small farms from getting food to local people. State legislators' pushback against "food sovereignty" advocates like Retberg, in Maine and elsewhere in the country, has only emboldened her.

"This used to be how it was decades ago. It's only changed recently, and that's a pretty aberrant period in our food history," she said. "It's my right, as an individual, to grow the food I eat."

The Retbergs, like the food sovereignty movement they are a part of, aren't going anywhere. The movement consists of a loose collection of farmers and activists who want to exempt local food producers from federal and state regulations, arguing they work in favor of big food producers and trample on the little guy.

Sedgwick, just south of Penobscot, was the first town in Maine to approve an ordinance declaring local control of food production, and supporters believe it was the first of its kind in the country. Sixteen other Maine towns have followed.

Supporters of an unsuccessful attempt to amend Maine's constitution this year to protect food freedom said the defeat is only a bump in the road for hundreds of Mainers and others who want to ensure local control of food production.

A bill calling for the amendment, proposed by organic farmer and Democratic state Rep. Craig Hickman, would have declared the right to food as "inalienable" in Maine. The amendment, if also approved by state voters, would have made it impossible to infringe upon residents' ability to hunt, gather or farm for whatever food they choose, or to prevent them from buying from others who produce food they want.

Backers saw it as a way to prevent government from intruding in local farm production and sales, and to take food production back from corporate control. But the Maine Senate shot down the proposed amendment on March 23, a day after the House approved it by a two-thirds majority.

Opponents and skeptics, ranging from state regulators and legislators to other farmers, have described the amendment as vague, unnecessary or potentially dangerous. Some saw it as a way to skirt rules about inspections and safety that could be dangerous for consumers of products that present health risks, such as raw milk.

Sen. Peter Edgecomb, a Republican from Caribou who grew drinking raw milk up on a farm in Limestone, said he feared the law could open the doors for a food contamination incident that could scare consumers away from Maine's small farms.

"Maine ranks very high in food safety in the country," Edgecomb said. "I'd like to keep it that way."

Maine's attempt at a food freedom bill is an outgrowth of national campaigning for localized food security by groups such as the Organic Consumers Association.

Local food advocates have tried to pass state laws similar to the Maine proposal in other states, with minimal success, though they've succeeded in passing local resolutions and ordinances in several states, ranging from Vermont to Utah. A 2012 effort in New Hampshire to exempt locally grown food from federal regulations swiftly died in the Legislature.

It wasn't supported by the New Hampshire Farm Bureau Federation, and the group's policy director called it nothing more than a "feel-good" measure. Rob Johnson, the policy director, said part of the concern was that eliminating compliance with federal regulations could lead to substandard products.

The fight over food in Maine is tied in part to a bitter dispute over regulations about raw milk. The state's highest court in 2014 rejected a Blue Hill farmer's challenge of regulations that required him to be licensed to sell raw milk at his farm stand.

The ruling angered some farmers and consumers, who saw it as a strike against local control. The state contended it was a just protection of public health.

"When a mother calls and her kid is being weaned onto our milk, that's a part of this," he said. "It makes us necessary."