Report says more than 80 percent of China's underground water is unsafe for drinking because of pollution. 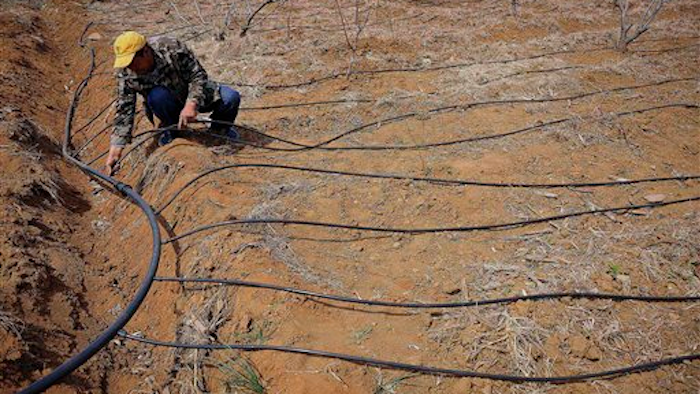 In this April 6, 2016 photo, a farmer sets up water pipes for trickle irrigation at a cherry garden in Yantai in east China's Shandong province. A government report says more than 80 percent of underground water drawn from relatively shallow wells used by farms, factories and mostly rural households is unsafe for drinking because of pollution from heavy metals and agricultural chemicals.
Chinatopix via AP

BEIJING (AP) — More than 80 percent of China's underground water drawn from relatively shallow wells used by farms, factories and mostly rural households is unsafe for drinking because of pollution, a government report says.

The ministry said that of those samples, 32.9 percent were classed as suitable only for industrial and agricultural use, while 47.3 percent were unfit for human consumption of any type. None were considered pristine, although water in wells in the Beijing area was rated better overall than elsewhere in the northeast.

Following the report's release on Monday, officials sought to reassure the public that most household water used by urban Chinese households is safe because it comes from reservoirs, deep aquifers or rivers that are treated to ensure safety.

"The quality of drinking water is good overall," Chen Mingzhong, director of the ministry's Department of Water Resources, told reporters at a news conference.

Most public attention in recent years has focused on heavy air pollution in Chinese cities, although water and soil contamination are also regarded as serious by environmentalists.

Water shortages are also expected to pose an increasing challenge to agriculture, with much of the arid North China Plain reliant on aquifers whose levels are falling fast. China's major lakes are also heavily polluted, largely due to fertilizer run-off and the dumping of untreated factory waste.

Environmental group Greenpeace called the ministry's report "another stark warning of the extent of groundwater pollution in China."

In a statement, Greenpeace's east Asia toxics campaign manager Ada Kong applauded the ministry's recognition of the problem and said taking serious action to tackle the problem was the next step.

"Water pollution in China is every bit as serious an issue as air pollution," Kong said.

Part of the problem is that the Water Resources Ministry and Ministry of Environmental Protection have yet to clarify their roles and responsibilities in carrying out a National Groundwater Pollution Prevention Plan issued in 2011 and promised 34 billion yuan ($5.2 billion) in funding, Kong said.

The authorities should also regularly test the deep groundwater that urban areas rely on, Greenpeace said.