U.S. officials moved to strengthen safety rules for the nation's 300,000-mile network of natural gas transmission pipelines in response to numerous fiery accidents, including a 2010 California explosion that killed eight people and injured more than 50. 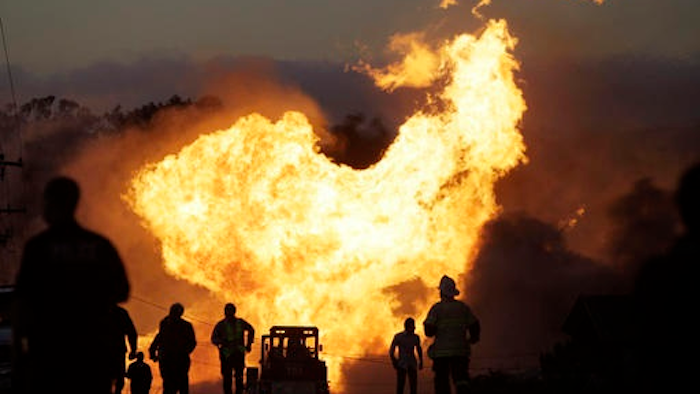 In this Sept. 9, 2010 photo, a massive fire roars through a neighborhood in San Bruno, Calif. U.S. officials are moving to strengthen natural gas pipeline safety rules following decades of fiery accidents including the 2010 California explosion that killed 8 people and injured more than 50.
AP Photo/Paul Sakuma, File

The Department of Transportation proposal would expand inspection and repair rules to include lines in some rural areas and recently-installed lines in burgeoning gas drilling fields.

Pressure-testing for leaks would be required on older lines that were previously exempt, such as the Pacific Gas and Electric Company pipe constructed in 1956 that broke and torched a residential neighborhood in San Bruno, California, six years ago.

But the government sidestepped for now action on emergency valves that can automatically shut down ruptured gas lines. That issue was highlighted by San Bruno, where a 30-inch-diameter pipeline buried beneath a suburban street continued spewing gas for 95 minutes after it broke, destroying 38 homes and damaging 70 others before a utility worker manually shut it down.

The Associated Press has reported on the potential benefits of automatic valves, and safety officials have urged making them mandatory. The gas industry has resisted, in part due to their potential high cost.

In the past two decades, the government has recorded more than 2,000 accidents on gas transmission lines across the U.S., resulting in 46 deaths, 181 injuries and $1.8 billion in damages.

The AP obtained details on Thursday's proposal in advance of its public release. Complying would cost companies an estimated $597 million to $711 million over the next 15 years, according to federal and industry officials. Benefits primarily from hundreds of avoided accidents would total $3.2 billion to $4.7 billion over the same period.

They would bring under federal regulation for the first time roughly 70,000 miles of "gathering lines" that transport fuel from gas fields to storage areas or into transmission systems, officials said.

"The significant growth in the nation's production, usage and commercialization of natural gas is placing unprecedented demands on the nation's pipeline system," Foxx said in a statement provided to the AP.

The rules would extend pressure-testing to include lines built before 1970, a step the National Transportation Safety Board has long recommended.

Some companies already have been testing older lines voluntarily, said Marie Therese Dominguez, administrator for the Transportation Department's Pipeline and Hazardous Materials Safety Administration. But Dominguez said the agency has identified 7,400 miles of pipe that have never been assessed for problems.

"I really do think this is going to lead to a higher level of safety," she said. "It's going to reduce the number of incidents related to gas transmission."

Don Santa, president of Interstate Natural Gas Association of America, said the industry group would look closely at the proposal to see if it is consistent with a voluntary program its members adopted in 2012.

Pipeline safety advocates said the proposal was long overdue and addresses major gaps in government oversight of the industry. That includes expanding inspection and repair rules to include rural areas where companies to date largely have been self-regulated.

But Carl Weimer with the Bellingham, Washington-based Pipeline Safety Trust said no requirement for automatic shut-off valves was a glaring shortcoming.

"We saw in San Bruno, when someone has to jump in a truck and drive through rush-hour traffic to manually shut off a valve, how much longer that left that blowtorch to blow into that neighborhood," Weimer said.

His comments were echoed by U.S. Rep. Jackie Speier, whose San Francisco-area district includes San Bruno. She expressed disappointment that rules were so long in the making. Speier added that action on automatic valves needs to come quickly, and the government must protect public safety, "not industry profit margins."

Installing automatic valves would cost $100,000 to $1 million each, according to estimates from utility officials.

Dominguez said the use of automatic shut-off valves remained a high priority for the agency and would be addressed separately. She could not offer a timeline.