Proving criminal responsibility for failing to prevent the Fukushima meltdowns may be difficult, but many people, including residents of the area affected by the disaster, say they hope any trial will reveal information about the disaster. 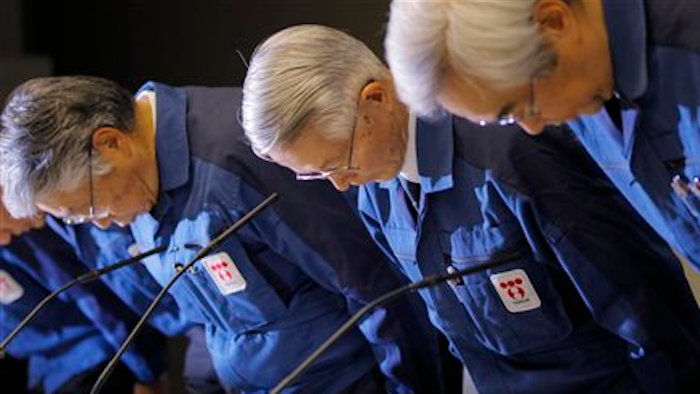 In this March 30, 2011, file photo, Tokyo Electric Power Co., (TEPCO) then Chairman Tsunehisa Katsumata, center, with then Vice President Sakae Muto, right, bows before a news conference at the company's head office in Tokyo. Three former Japanese utility executives, including Katsumata and Muto, were formally charged for alleged negligence in the Fukushima nuclear disaster Monday, Feb. 29, 2016, becoming the first ones from the company to face a criminal court.
AP Photo/Itsuo Inouye, File

TOKYO (AP) — Three former Japanese utility executives were formally charged Monday with negligence in the Fukushima nuclear disaster, becoming the first officials from the company to face a criminal trial.

Five court-appointed lawyers indicted Tsunehisa Katsumata, chairman of Tokyo Electric power Co. at the time of the crisis, and two other TEPCO executives, according to the lawyers' offices. The three men, charged with professional negligence, were not taken into custody.

The indictment follows a decision in July by an 11-member judicial committee to send the three men to a criminal court after prosecutors dropped the case twice, saying they could not obtain sufficient evidence to bring criminal charges against them.

In Japan, a court-appointed judicial committee has the final say about criminal complaints filed to a prosecutors' office, which are then dropped.

Proving criminal responsibility for failing to prevent the Fukushima meltdowns may be difficult, but many people, including residents of the area affected by the disaster, say they hope any trial will reveal information about the disaster and TEPCO's role that has not been disclosed by the utility.

"I believe truths about the accident that we are not told of yet will be revealed in court, and that a fair ruling will be handed down to the defendants for their responsibility," said Ruiko Muto, head of a group of more than 5,000 people from Fukushima and other parts of Japan that filed the criminal complaint four years ago.

Three reactors at the Fukushima Dai-ichi plant suffered meltdowns after being damaged by a massive March 2011 earthquake and tsunami. The accident released large amounts of radiation, forcing tens of thousands of people to evacuate.

The indictment said Katsumata, 75, along with Sakae Muto, 65, and Ichiro Takekuro, 69, who were vice president and technical adviser, respectively, failed to foresee and take precautionary steps for the tsunami, resulting in the deaths of 44 hospitalized elderly people during the evacuation period and injuries to 13 soldiers who responded to the emergency, Kyodo News agency said.

The three executives have said that predicting a tsunami of that magnitude was impossible.

The judicial committee said in July that the three men were aware by 2009 of the risk of a massive tsunami to the Fukushima plant. It said they should be charged with professional negligence resulting in death and injury during the accident and its aftermath. TEPCO and government officials say no one died as a direct result of radiation released by the accident.

Reports from government and parliamentary investigations of the accident have said a lack of a safety culture in TEPCO and weak risk management, including an underestimation of a tsunami threat, led to the disaster. They said TEPCO ignored tsunami safety measures amid a collusion with then-regulators and lax oversight.

The utility has said it could have been more proactive on safety measures, but that a tsunami of the magnitude that crippled the plant could not have been anticipated.

While struggling with the decades-long cleanup of the wrecked Fukushima plant, TEPCO is hoping to restart two nuclear reactors at the Kashiwazaki-Kariwa plant in northern Japan.

The disaster resulted in Japan taking all of its nuclear power reactors offline for checks. Of the country's 43 workable reactors, four have been put back online since last year, while the others are still offline for repairs or safety checks.

Radiation Not the Biggest Health Impact from Fukushima