The three former executives said they don't think they bear criminal responsibility because they couldn't predict the enormous tsunami that flooded the plant. 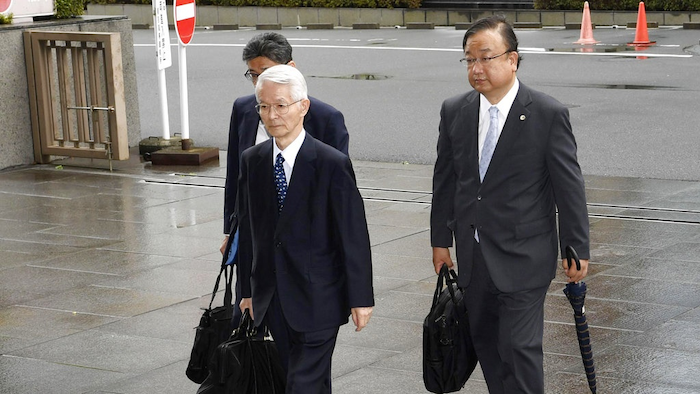 Tsunehisa Katsumata, center, former chairman of Tokyo Electric Power Co. (TEPCO), accompanied by his lawyers, arrives at Tokyo District Court for a trial in Tokyo Friday, June 30, 2017. Three former executives of TEPCO, including Katsumata, are going on trial for alleged negligence in the 2011 Fukushima nuclear disaster. The trial is the first to consider whether the utility can be held criminally responsible.
Koji Harada/Kyodo News via AP

Tsunehisa Katsumata, the 77-year-old ex-chairman of TEPCO, and two former vice presidents said they don't think they bear criminal responsibility because they couldn't predict the enormous tsunami that flooded the plant.

That issue is expected to be the crux of their trial, the first to consider whether officials of the utility can be held criminally responsible. TEPCO itself has not been charged. The trial at Tokyo District Court is likely to take more than a year.

A prosecutor told the court that the three defendants had access to data and studies that anticipated the risk of a tsunami exceeding 10 meters (30 feet) that could trigger a loss of power and severe accidents.

"They continued running the reactors without taking any measures whatsoever," the prosecutor said. "If they had fulfilled their safety responsibilities, the accident would never have occurred."

The lawyers in a Japanese trial are generally not identified by name.

Three reactors had meltdowns, and radiation spread into surrounding communities after the nuclear plant north of Tokyo was hit by a powerful earthquake and tsunami on March 11, 2011. Tens of thousands of residents were forced to evacuate, and some areas remain uninhabitable more than six years later.

"I apologize for the tremendous trouble to the residents in the area and around the country because of the serious accident that caused the release of radioactive materials," Katsumata said as he bowed slightly.

He and his co-defendants, Sakae Muto, 67, and Ichiro Takekuro, 71, said they couldn't foresee the disaster.

"When I recall that time, I still think it was impossible to anticipate an accident like that," Muto said. "I believe I have no criminal responsibility over the accident."

Prosecutors considered the case twice and dropped it both times, but a citizens' judicial panel overrode their decision and indicted the former executives. They are being tried by a team of lawyers appointed by the court.

The former officials are accused of not taking sufficient preventive measures despite being aware of the risk of a major tsunami at least two years before it happened.

Defense attorneys said in court that the tsunami projection was not well-established and divided experts. They said the actual damage was much larger than projected, so if TEPCO had taken steps based on the projection, it would not have prevented the disaster.

The prosecution began presenting more than 230 pieces of evidence including emails between safety officials and the two vice presidents that suggested increasing concern and a need to take additional tsunami measures at the Fukushima plant.

TEPCO was already conducting a tsunami safety review following a 2007 earthquake in northern Japan, and the three former executives routinely participated in it, according to the prosecutors. In March 2008, a TEPCO subsidiary projected that a tsunami as high as 15.7 meters (47 feet) could hit Fukushima based on historical data, prompting a consideration of the construction of seawalls, the prosecution said.

In an email that year, a TEPCO construction official said the updated tsunami estimate made Fukushima's safety measures insufficient, and they needed a "logical" excuse to keep the plant running. At a meeting later that year among TEPCO construction officials, a tsunami exceeding 10 meters (30 feet) was described as "disastrous." Muto later instructed them to take time for a further examination by experts, in effect delaying the plan, the prosecution said.

The three men are charged with professional negligence resulting in death and injury, including the deaths of more than 40 senior citizens during and after evacuation from a hospital, and injuries to 13 people including TEPCO employees during emergency work.

Government and parliamentary investigative reports have said that TEPCO's lack of a safety culture and weak risk management, including an underestimation of tsunami risks, led to the disaster. They also said TEPCO ignored tsunami protection measures amid collusion with regulators and lax oversight.

TEPCO has said it could have been more proactive with safety measures, but that a tsunami of the magnitude that crippled the plant could not have been anticipated.

The criminal trial for the TEPCO executives was prompted by an appeal by more than 5,700 people from Fukushima and other parts of Japan, urging prosecutors to investigate and send the utility executives to court to determine who was responsible for the disaster.

Japan to Stick with Nuclear