Before Ship Sank, Parts had 'Deteriorated Severely' on Boilers 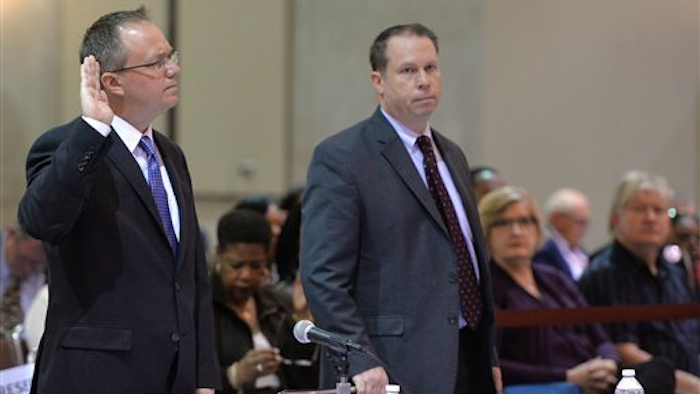 Jim Fisker-Andersen, left, director of ship services for TOTE Services, is sworn in at the beginning of his testimony at the hearings into the sinking of the El Faro on Friday, Feb. 19, 2016 in Jacksonville, Fla. All 33 aboard died after the vessel lost propulsion and was mauled by the winds of Hurricane Joaquin, a Category 4 storm, on Oct. 1, 2015.
Bruce Lipsky/The Florida Times-Union via AP, Pool

An inspection conducted on the boilers of a ship before it sank in a hurricane last fall found parts that had "deteriorated severely" or needed to be replaced, but company engineers believed it was still safe enough to set sail, testimony at a Coast Guard hearing revealed Friday.

The boiler issues on El Faro were an indication of normal wear and tear, director of ship management for Tote Services Inc. John Fisker-Andersen told a U.S. Coast Guard investigative board.

The 790-foot El Faro sank in Hurricane Joaquin on Oct. 1 after losing propulsion while sailing from Jacksonville to Puerto Rico. All 33 crew aboard died.

The 40-year-old vessel's boilers were scheduled for service a month after its ill-fated voyage. Inspectors had found deterioration in parts called "burner throats," pieces of the main propulsion steam boiler that help shape the boiler's flame and properly mix fuel and air.

Fisker-Andersen testified that nothing in the boiler reports would normally cause a cancellation of the voyage.

"There aren't any showstoppers in here," he said, referring to the inspection findings. "There's nothing in here as explained to me that's a 'no sail.'"

The board, made up of Coast Guard and National Transportation Safety Board investigators, has been questioning Tote officials for four days to find answers about the ship's sinking. Another series of hearings is scheduled later this year, after which the panel will release a report.

If any criminal misconduct is unearthed, the Coast Guard can refer it to the U.S. Department of Justice.

Tote officials have said Capt. Michael Davidson was completely responsible for his voyage planning, including whether to reroute in bad weather. Multiple officials have said the company did not monitor weather and its vessels' locations from shore at all because that is the job of the ships' captains.

William Bennett, an attorney representing Davidson's widow, raised questions about whether the captain had reliable weather information about the storm before leaving Jacksonville.

According to testimony, however, Davidson knew enough about Joaquin's track while at sea to email company officials about a change in route on his way back from Puerto Rico. His email, written the day before the vessel sank, asked if he could take a longer, safer route through the Old Bahama Channel on his return.

Tote managers said captains were under no obligation to ask permission for route changes, but the board's investigators questioned why Davidson's email was then posed as a question.

No one replied to Davidson for hours, but finally Fisker-Andersen wrote back "authorized."

On Friday, Fisker-Andersen said he used the wrong term in his reply and only replied because no one else had.

"My intent was to provide a clear response to him that, absolutely you go where you need to go."

It's an effort to prevent its fraying grid from sparking wildfires.
Jul 22nd, 2021
Follow Us
Most Recent