Price-fixing allegations have been winding their way through U.S. courts for more than a decade. 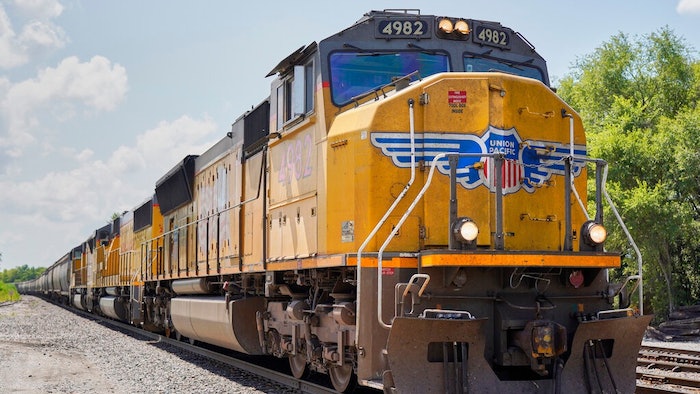 In this July 31, 2018, file photo a Union Pacific train travels through Union, Neb. A federal judge has ruled that the nation's four largest railroads can't exclude details of their conversations from lawsuits challenging billions of dollars of charges the railroads imposed in the past. The ruling on Friday, Feb. 19, 2021, undercuts one of the defenses Union Pacific, BNSF, CSX and Norfolk Southern had offered in dozens of lawsuits major companies filed last year questioning the way railroads set rates.
AP Photo/Nati Harnik, File

OMAHA, Neb. (AP) — A federal judge has ruled that the details of conversations between the nation's four largest railroads should be included in lawsuits challenging billions of dollars of charges the railroads imposed in the past.

The ruling on Friday undercuts one of the defenses Union Pacific, BNSF, CSX and Norfolk Southern had offered in dozens of lawsuits major companies filed last year questioning the way railroads set rates. The lawsuits say the railroads conspired to boost prices starting in 2003 by imposing coordinated fuel surcharges and pocketing billions of dollars in profits.

The price-fixing allegations have been winding their way through U.S. courts for more than a decade since several companies first filed similar lawsuits in 2007. The cases are moving forward individually after an appellate judge ruled last year that the case didn't qualify for class-action status for as many as 16,000 shippers affected by the rates.

The companies that filed the lawsuits — which include carmakers like Hyundai, manufacturers such as Campbell Soup and power companies like Dominion Energy — say the four railroads had meetings, phone calls and email communications through which they embarked on the conspiracy to apply the fuel surcharges to all traffic to generate profits.

One of the plaintiffs' attorneys, Stephen Neuwirth, said he's glad the details of those conversations can be presented at trial.

“That evidence establishes that for at least five years, the railroads violated U.S. law by coordinating fuel surcharges as a way to raise rail freight prices,” Neuwirth said.

In the lawsuits, the railroads have argued that their fuel surcharges were legal and were simply designed to recover the skyrocketing cost of fuel at the time.

The railroads had also argued that an obscure law that allows railroads to discuss rates on shipments that cross multiple railroads should have protected their conversations about rates, but the judge rejected that argument on Friday.

CSX spokeswoman Cindy Schild said the railroad based in Jacksonville, Florida, believes the price-fixing allegations are unfounded, and it will continue to defend its surcharges because they were developed legally.

Union Pacific, which is based in Omaha, Nebraska, plans to continue “vigorously defending itself against the allegations in these lawsuits,” spokeswoman Elizabeth Graham said.

Norfolk Southern, based in Norfolk, Virginia, and BNSF, which is headquartered in Forth Worth, Texas, both declined to comment on the lawsuits.

In 1980, Congress largely deregulated railroads. That led to a number of consolidations in the industry resulting in the four major railroad shippers that exist today: Norfolk Southern and CSX in the Eastern United States and BNSF and Union Pacific serving much of the West.

Although the companies are individual entities, they are legally allowed to work together to some degree to ensure the continuity of the nation’s railroad network.

Plan Aims to Get Wheat from Ukraine to the World