The package includes subsidies for parents who need to take time off work due to school closures, funding for development of virus vaccines and test kits and for extra production of protective masks. 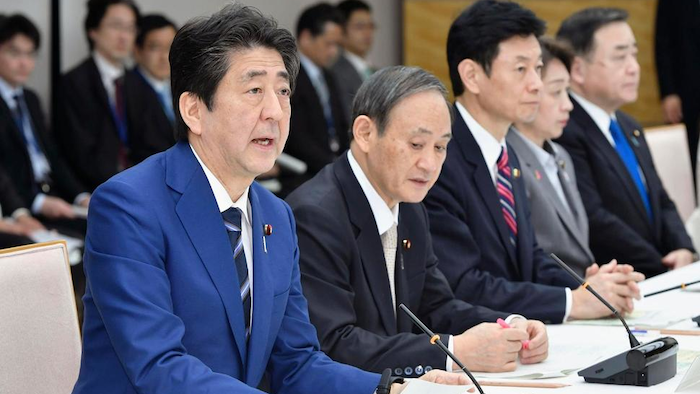 Japan's Prime Minister Shinzo Abe, left, speaks during a meeting on countermeasures against the new coronavirus infections at his official residence in Tokyo Tuesday, March 10, 2020.
Yoshitaka Sugawara/Kyodo News via AP

TOKYO (AP) — A task force set up by Japan's Prime Minister Shinzo Abe on Tuesday approved a 430 billion yen ($4.1 billion) package that includes support for small to medium-size businesses hit by the coronavirus outbreak, amid criticisms over his handling of the crisis.

Among other relief, the package also includes subsidies for parents who need to take time off work due to school closures, funding for development of virus vaccines and test kits and for extra production of protective masks, banning of their resale.

Abe kept in place a government request for the public and organizers to cancel, postpone and scale down events for 10 more days to help reduce the risks of the virus spreading further.

The plan also includes support for hospitals to prepare for a potential surge in the number of patients in coming weeks. A worst-case scenario estimate by the health ministry showed 20,000 people could be hospitalized and 45,000 outpatients might require treatment per day.

As in many other major economies, small and medium-sized businesses provide most jobs and are suffering the greatest impact from a sharp decline in tourism, travel and other spending as Japanese heed calls to stay home to minimize the risk of spreading or catching the virus. Contract workers and others who don't get paid time off also are vulnerable to losing their livelihoods.

The government said it plans to provide 1.6 trillion yen ($15 billion) in interest-free, no collateral loans to help such companies manage during the crisis.

As part of Japan's measures, Abe said Japan will ban entry of foreign visitors from San Marino in northern Italy and some parts of Iran beginning Wednesday, citing a sharp increase of confirmed cases in the areas. Japan also has restricted entry from China and South Korea.

Japan's Cabinet on Tuesday also approved a proposal for legislation that will allow Abe to declare a state of emergency when necessary. Passage of that measure, which opponents say might infringe on civil liberties, is expected later this week.