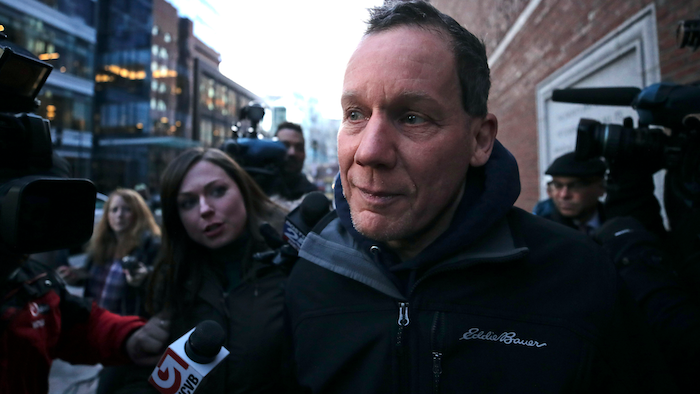 Harvard University professor Charles Lieber is surrounded by reporters as he leaves the Moakley Federal Courthouse in Boston, Thursday, Jan. 30, 2020. Leiber, chair of the department of chemistry and chemical biology, with lying to officials about his involvement with a Chinese government-run recruitment program through which he received tens of thousands of dollars.
AP Photo/Charles Krupa

BOSTON (AP) — A Harvard University professor charged with lying about his role in a Chinese talent recruitment program was released from custody Thursday and ordered to post a $1 million cash bond.

Charles Lieber appeared in Boston's federal court wearing orange jail garb and chains around his ankles two days after his arrest at his Ivy League university office, where he was chair of the chemistry and chemical biology department.

Lieber is accused of lying about his participation in China's Thousand Talents Plan, which targets overseas scientists and researchers willing to bring their expertise to China in exchange for things like research funding and lab space.

Prosecutors had proposed setting bond at $1.5 million secured by Lieber's suburban Boston home. But Magistrate Judge Marianne Bowler instead ordered Lieber to post a $1 million cash bond by next Thursday.

Lieber did not comment as he left the courthouse with his wife amid a throng of reporters after the hearing. His lawyers also declined to comment.

Lieber is required to give up his passport and disclose any foreign bank accounts and is barred from talking to any potential victims or witnesses in the case, among other restrictions. His wife will also hand over her passport after prosecutors raised concerns that she could move cash to another country.

Prosecutors say Lieber agreed to conduct research, publish articles and apply for patents on behalf of China's Wuhan University of Technology in exchange for $50,000 per month and about $150,000 in living expenses. He also received $1.5 million to establish a research lab at the Chinese university, authorities said.

Authorities say Lieber hid his involvement in the program from Harvard and told federal investigators in 2018 that he had never been asked to participate in the program.

Harvard officials said Tuesday that Lieber has been placed on administrative leave and that the school is “conducting its own review of the alleged misconduct.”

Lieber has been at Harvard since 1991 and is described by his research group as a “pioneer in nanoscience and nanotechnology.” He has also won prizes for growing huge pumpkins in the backyard of his Lexington home, including a 1870-pound (850-kilogram) pumpkin in 2014, ABC News reported at the time.

Chinese recruitment programs such as the Thousand Talents Plan have been exploited by scientists who have downloaded sensitive research files before returning to China, filed patents based on U.S. research, lied on grant applications and failed to disclose money they had received from Chinese institutions, according to a congressional report issued last fall.

Federal prosecutors in Boston also announced charges this week against a researcher at Boston University, who is accused of concealing her ties to the Chinese military. Yanqing Ye, who prosecutors say is a lieutenant in the People’s Liberation Army, lied about her military service to get into the U.S. and researched U.S. military projects and gathered information on two U.S. scientists for the Chinese military, authorities allege.

The FBI on Thursday released a wanted poster for Ye, who is believed to be in China.