Tax increases would depend on how much its highest-paid executive makes compared to its employees. 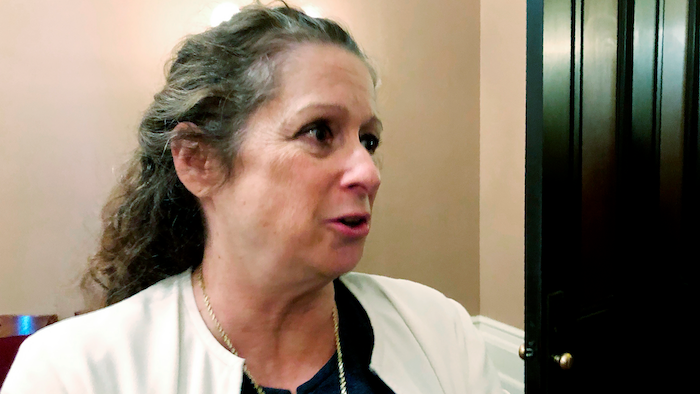 Abigail Disney, granddaughter of Walt Disney Co. co-founder Roy Disney, speaks with reporters at the Capitol in Sacramento, Calif., Wednesday, Jan. 15, 2020. Disney testified before state lawmakers in support of a bill that would raise taxes on some of the country's largest corporations. The size of the tax increase would depend on the gap between what a company pays its CEO versus the average salary for employees. The larger the gap, the higher the tax increase.
AP Photo/Adam Beam

SACRAMENTO, Calif. (AP) — California is considering raising taxes on some of the country's largest companies, but the size of the tax increase would depend on how much its highest-paid executive makes compared to its employees.

The bill by Democratic state Sen. Nancy Skinner passed out of its first committee hearing on Wednesday, keeping it alive a head of a Jan. 31 deadline to pass the Senate.

The proposal would only apply to companies that post at least $10 million of taxable income from business conducted in California. That would apply to about 2,000 companies nationwide, including the Walt Disney Co., headquartered in Burbank.

Heiress Abigail Disney, granddaughter of Roy Disney — the brother of Walt Disney and one of the company's co-founders — supports the bill. She has no formal role at the company, but she has been advocating for higher wages for the company's workers.

“At the happiest place on Earth, they are paid so poorly that they rely on food banks, sleep in cars or live so close to the bone that even a small problem could send them into a death spiral,” Disney told state lawmakers on Wednesday.

Abigail Disney's comments about the company's workers stem from a visit she made to some Disney Land employees at an offsite union office in Anaheim.

Walt Disney Co. CEO Bob Iger received more than $65 million in 2018, according to media reports, a higher-than-usual figure because of a one-time stock award connected to the company's acquisition of 21st Century Fox. That salary was more than 1,400 times the median pay of a Disney employee, according to a study from Equilar.

A spokesman for the Walt Disney Co. said the company committed to a minimum wage of $15 an hour, health insurance for a little as $6 a week, childcare subsidies and an initial investment of $150 million to fully pay for college degrees of hourly workers.

“The truth is, Disney has made significant investments to provide for the upward mobility of our employees,” according to a statement from the company.

Many of the state's business groups oppose the law, including the California Business Roundtable, which represents large companies. President Rob Lapsley said the bill would keep companies from coming the state.

“I'm not here today to defend CEO pay. What I am here today to do is to defend jobs," he said. “Take the CEO pay out of it. What (the bill) is sending is a broader signal that the Legislature is intending to be able to regulate every aspect of free enterprise in this state.”

California would not be the first government in the U.S. to try this, but would be the the largest. In 2016, city officials in Portland, Oregon, approved a 10% tax on publicly traded companies that pay their CEOs 100 to 250 times the average worker.

Some lawmakers signaled they want some changes before the bill comes for a vote in the Senate.

One question is whether the state should make money off the tax. Lawmakers could write the bill so it rewards companies that have smaller gaps between their CEO's salary and the average pay of their workers.

As written, state officials estimate the legislation could bring in up to $4.1 billion. Skinner says it's reasonable for the state to make money off the tax because the rising income inequality means more workers are relying on public assistance.

“California's taxpayers are basically paying the cost for the services that employees then turn to because they don’t have a wage that can provide their families needs,” Skinner said.

Republican state Sen. John Moorlach questioned why the Legislature would seek to meddle with the salaries of big companies when athletic coaches at some of the state's public universities make millions of dollars.

“Are we going to be looking at our own house,” Moorlach said.

Skinner said public employees in California “by and large ... have a very decent wage," saying most of them do not face “the types of problems our low-wage workers are facing.”

Abigail Disney told lawmakers the issue was a problem of corporate culture “50 years in the making.”

“If your entire reputation as a company relies on the idea of its clean floors, you had better be willing to pay your workers enough to do the job well and with dignity,” Disney said. “Because dignity is not a perk.”