The report paints a picture of regulators telling those who live in and around the nation's fourth-largest city that there were no public health risks even though it lacked a full range of data to make such a determination. 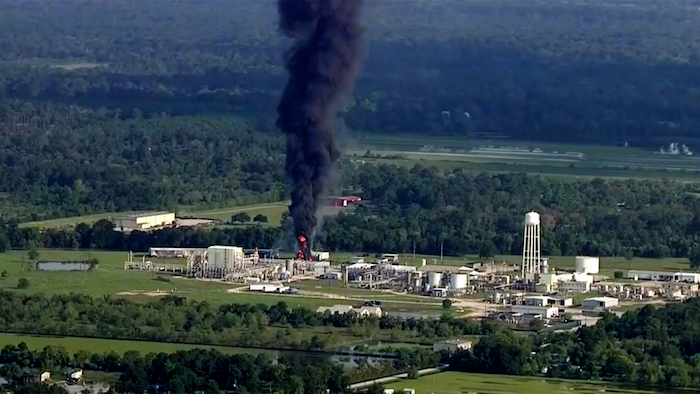 AUSTIN, Texas (AP) — A federal watchdog released a report Monday that cast doubt on the public health assurances made after Hurricane Harvey unleashed an environmental assault on the country's largest petrochemical corridor, saying officials relied on limited data to offer residents peace of mind and that Houston's air quality monitors had been offline to prevent storm damage.

The report by the U.S. Environmental Protection Agency's Office of Inspector General paints a picture of state and federal regulators telling those who live in and around the nation's fourth-largest city — which was inundated with more than 50 inches of rainfall — that there were no public health risks even though it lacked a full range of data to make such a determination.

And while the report says no instances were found of the EPA relaying inaccurate information during Harvey about air quality, it also determined that none of the air-quality sampling done by the federal agency — with a mobile laboratory and with a sensor-equipped plane — proved useful to assessing health risks.

Federal officials also said officials from the Texas Commission on Environmental Quality, which is the state's environmental regulator, declined repeated requests to discuss their decision-making during Harvey or to share data.

“Despite several conversations to arrange for written answers to our initial list of questions, we never received a response from the TCEQ,” the report states.

Responding to the findings, TCEQ Chairman Jon Niermann said the report reflected “numerous misunderstandings about the Hurricane Harvey response" in a letter sent to the inspector general Monday. He said the state had acted in good faith to set up meetings and that his agency regretted any miscommunication.

In one example, the report says the EPA collected inadequate data after Harvey while screening for elevated air contamination using a mobile laboratory known as a trace atmospheric gas analyzer.

“Although the EPA, the TCEQ and the city of Houston assessed that the data indicated there was no concern — and subsequently issued a press release communicating this assessment to the public — we found that the TAGA’s sampling time frame was too short to generate data that could accurately assess airborne toxin concentrations for making health-based assessments,” the report states.

The report supports findings by The Associated Press and Houston Chronicle last year that revealed a far more widespread toxic impact than authorities publicly reported after the storm, which slammed into the Texas coast and then hovered over the Houston area for days.

Most toxic emissions after Harvey were due to tank failures at industrial plants and facilities shutting down and restarting, the report states. But once restarted, the “monitoring efforts did not always generate data considered suitable for making health-based assessments."

In response to what it considered an inadequate state and EPA response at the time, the Environmental Defense Fund paid for independent air-quality testing to measure post-hurricane pollution in east Houston, which has a heavy petrochemical industry footprint. People living in that part of town were complaining of nausea due to a spike in emissions and tank spills.

Earlier this year, the Los Angeles Times reported that NASA scientists were ready to fly a plane over the hurricane zone to monitor pollution levels but were turned away by the EPA and TCEQ. Emails obtained by the newspaper showed that environmental officials expressed worry about confusion and overlap with their own analysis.

The report released Monday comes at the end a year of high-profile explosions and fires at refineries up and down the Texas coast. The latest was a chemical fire in November at the TPC Group plant that led authorities to issue mandatory evacuation orders for more than 50,000 people.

That was followed by a smaller voluntary evacuation order after officials detected elevated levels of butadiene, a chemical used to make synthetic rubber and other products. Local officials said the elevated levels did not pose a serious health risk.