Facebook is rebuffing efforts by U.S. Attorney General William Barr to give authorities a way to read encrypted messages. 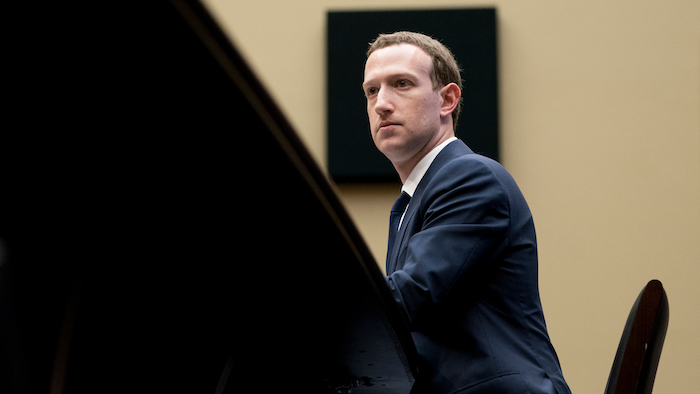 In this April 11, 2018, photo, Facebook CEO Mark Zuckerberg listens to a question as he testifies before a House Energy and Commerce hearing on Capitol Hill in Washington. Facebook is rebuffing efforts by U.S. Attorney General William Barr to give authorities a way to read encrypted messages. The heads of Facebook-owned WhatsApp and Messenger services told Barr and his U.K. and Australian counterparts that Facebook is moving forward with plans to enable end-to-end encryption on all of its messaging services. End-to-end encryption locks up messages so that not even Facebook can read their contents.
AP Photo/Andrew Harnik, File

Facebook is rebuffing efforts by U.S. Attorney General William Barr to give authorities a way to read encrypted messages.

The heads of Facebook-owned WhatsApp and Messenger services told Barr and his U.K. and Australian counterparts that Facebook is moving forward with plans to enable end-to-end encryption on all of its messaging services. End-to-end encryption locks up messages so that not even Facebook can read their contents.

Barr and other officials had asked the company in October to hold off. In a letter to Facebook CEO Mark Zuckerberg, they insisted that precluding access by law enforcement could hinder efforts to prevent or investigate crimes. The letter repeatedly emphasized the dangers of child sexual exploitation to justify their stance.

Barr reiterated his concerns in a speech Tuesday, calling the encryption fight “one of our highest priorities" and describing “an increasing number of horror stories about how people are dying, or being molested or whatever, but we cannot get in."

Law enforcement has long sought a way to read encrypted messages that’s analogous to wiretaps for phone calls. Security experts, however, say that giving police such access makes messaging insecure for everyone by creating vulnerabilities that others can exploit.

In Facebook's response Monday to Barr and other authorities, Will Cathcart, head of WhatsApp, and Stan Chudnovsky, head of Messenger, said creating such a “backdoor” for law enforcement “would be a gift to criminals, hackers and repressive regimes, creating a way for them to enter our systems and leaving every person on our platforms more vulnerable to real life harm."

Facebook has said that people have the right to private conversations online and that companies are already able to respond to government agencies when they receive valid legal requests. Facebook's letter emphasized the many tools the company has built to try to detect criminal and other problematic activities using signals from unencrypted information.

His comments came on the same day that executives from Facebook and Apple were testifying about encryption at a Senate Judiciary Committee hearing.

Apple's director of user privacy, Erik Neuenschwander, told senators in prepared remarks Tuesday that encryption not only protects an iPhone user's sensitive data, but is an important way of safeguarding financial and health data in an “increasingly interconnected future."

“We do not know of a way to deploy encryption that provides access only for the good guys without making it easier for the bad guys to break in," he said.

Apple resisted the government's efforts to gain access to an iPhone belonging to a perpetrator of a 2015 terrorist attack in San Bernardino, which killed 14 people. The company went to court to block an FBI demand for Apple to disable security measures that complicated efforts to guess the phone’s passcode. The FBI eventually relented after it found another way of getting into the phone, but a longstanding fight between the tech industry and Justice Department over finding workarounds has flared up again under Barr.