A U.S. House committee chairman said President Trump's administration is selectively enforcing laws to apprehend immigrant workers who are in the U.S. illegally but not prosecute employers.

JACKSON, MS (AP) — It's "disappointing" that President Donald Trump's administration is selectively enforcing laws to apprehend immigrant workers who are in the U.S. illegally but not prosecute employers, a U.S. House committee chairman said Thursday.

"Not one employer or person from management has been arrested," Thompson said. "In fact, prosecutions of companies who hire undocumented workers have declined compared to the previous administration's numbers. The selective way the administration is enforcing our laws is disappointing."

"We're not satisfied with going after the low-level people, but as I'm sure you all understand, it is a lengthy process," Miles testified.

The Democrats called the arrests unnecessary, inhumane and demeaning, with U.S. Rep. Sheila Jackson Lee saying she would push for a law against separating parents and children because of immigration enforcement.

"I believe we should clarify that there is no policy, no dictate, that directs ICE and any other agency, no law to separate families from children," the Texas Democrat told reporters.

She and others called it a waste of resources to bring in 600 federal agents to arrest 680 people. Thompson said just agents' wages for the day cost $478,000.

"The trauma of these children is too painful," testified the Rev. Odel Medina, pastor of St. Anne Catholic Church in Carthage "They do not understand why their parents have been arrested.'"

Miles called it an "oversight" that some school districts weren't contacted, and told reporters later that "I think that there are lessons that need to be learned." But he also pushed back against the idea that people who violate immigration laws should be treated differently from other criminals.

"Like anyone who gets arrested for a crime in the United States, they can't go home," Miles testified. He echoed top Homeland Security officials who say arresting people working illegally in the United States is important because it will cut off the incentive for others to come.

"When we take some of the economic incentive away, it is going to have an impact," Miles testified.

Witnesses also questioned federal prosecutors' decision to indict so many people. Cliff Johnson, a University of Mississippi law professor and former assistant U.S. attorney, said prosecutors take some cases and decline others daily, and that what prosecutors were doing in Mississippi is "wrongheaded."

"These people are not criminals ...," Johnson testified. "Many of them are young mothers with a third-grade education or less, who themselves have been victimized by crimes. There are only a handful that have even a misdemeanor conviction."

Hurst, though, defended the prosecutions.

"Turning a blind eye to their illegal acts would not be fair to our nation, their victims, or the millions of naturalized American citizens who waited years and meticulously followed the process by which to become an American," he said in a statement.

Thompson and other Democrats promise legislative action, but it seems unlikely to arrive in time to help those facing criminal charges or deportation.

"We're not going to stop speaking until we have a way to citizenship that allows us to contribute to this country with peace and tranquility," said one woman who was arrested, who would only give her name as Lorena, citing fear that speaking up could worsen her legal troubles. 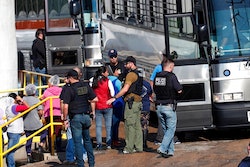 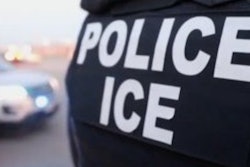 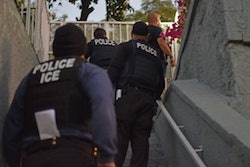