Depends on whom you ask. 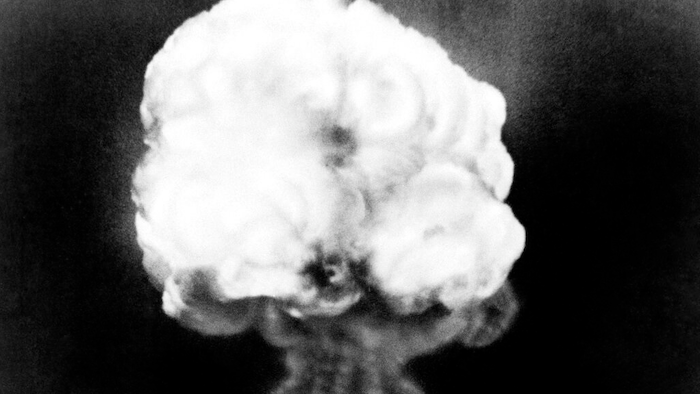 This July 16, 1945, file photo, shows the mushroom cloud of the first atomic explosion at Trinity Test Site near Alamagordo, N.M. A fight is raging in courts and Congress over where radioactive materials should be stored and how to safely get the dangerous remnants of decades of bomb-making and power generation to a permanent resting place.
AP Photo/File

RENO, Nev. (AP) — A fight is raging in courts and Congress over where radioactive materials should be stored and how to safely get the dangerous remnants of decades of bomb-making and power generation to a permanent resting place.

As federal officials insist they can move tons of lethal material without disaster, critics ask how much risk is acceptable and how far technology has come to safely ship nuclear waste.

"The question is: 'Are the regulations for safety and security adequate?'" said Edwin Lyman, head of the nuclear safety project at the Union of Concerned Scientists. "My judgment is no. They are antiquated. They need at least a fresh look."

Watchdogs like Lyman want the Nuclear Regulatory Commission, which regulates the commercial nuclear industry, to require transport containers to be tested to the point nuclear waste would be released — in a fire, catastrophic railroad or truck crash, plunge into water or by tampering, sabotage or terrorism.

"What isn't clear is: 'What are the conditions under which the package would fail?'" said Lyman, who has studied hazardous shipments for 25 years.

The biggest change is better technology to analyze accident risks, department researchers say. Officials previously were forced to assume transportation containers, called casks, would break and release dangerous waste because they had no proof otherwise.

Using 3D computer models for the first time in 2014, the Nuclear Regulatory Commission determined no radioactive material would be released if a fuel tanker crashed with a truck hauling spent nuclear fuel.

Upgrades in containers and communication between armed escorts and command posts alleviated many past concerns about the security and safety of shipments, said Frank Rusco, U.S. Government Accountability Office environment and natural resources chief.

The GAO, an independent, nonpartisan arm of Congress that examines how taxpayer money is spent, "has no concerns that casks and rail cars can be built to an acceptably high safety standard," Rusco said. "Getting societal acceptance of train loads of that stuff going from all these places is a bigger challenge."

The Energy Department acknowledges the public has concerns regardless of the safety measures.

The agency tracks shipments round the clock with GPS and real-time apps like those used to find cellphones. Trucks haul specialized trailers, and federal agents receive thousands of hours of training.

"The whole radioactive waste idea is somewhat of a mystery to the normal person," said Mark Senderling, deputy assistant secretary for waste and materials management. "When it's coming to their community, they don't understand ... the rigorous requirements the casks are under."

Senderling and other government officials point to decades without a serious accident.

The Nuclear Regulatory Commission said more than 1,300 shipments of spent fuel from reactors have been completed safely over 35 years.

"Four were involved in accidents, but none resulted in a release of radioactive material or a fatality due to radiation exposure," it said in 2014.

But watchdogs like Lyman say the government relies on computer simulations or scaled-down tests instead of putting the actual truck or rail containers through the rigors of a drop, fire or immersion in water to see if they can withstand crashes, sabotage or acts of terrorism.

The Nuclear Regulatory Commission, which sets testing standards and certifies containers, said the computer or scale-model tests provide "reasonable assurance of adequate protection of public health and safety." It says science shows scale-model testing can be relied on to make regulations.

"There are a lot of unanswered questions about what happens," Lyman said. "A real test of an explosive on a real cask containing real spent fuel is a dangerous test. It's one that hasn't been done."

Despite vows the shipments are safe, the Energy Department recently announced it will review all radioactive waste packaging and shipping after a Tennessee contractor revealed it may have mislabeled low-level nuclear waste — including such things as contaminated equipment and workers' clothing — that was sent to Nevada over six years.

Deputy Energy Secretary Dan Brouillette wrote in a July memo that he and Secretary Rick Perry were increasingly concerned about safe and secure packaging, the shipping of waste "and the impact that this matter could have on the safety of our workers, the public and the environment."

The memo came during fights in court over a secret federal shipment of weapons-grade plutonium from South Carolina to Nevada last year and in Congress over renewed Trump administration efforts to build a dump for the nation's most dangerous radioactive waste 90 miles (145 kilometers) from Las Vegas.

"We have to find a solution," Perry said earlier this year, holding a map of states storing spent nuclear fuel. "Thirty-nine states as repositories is not an appropriate solution."