UPS Gets Approval to Become a Drone Airline

The designation removes limits on the size of the company's potential drone operation. 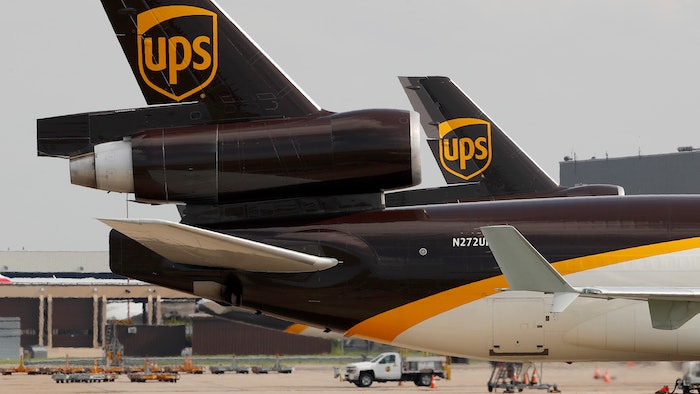 In this file photo a UPS aircraft taxis to its hangar area. UPS says it won government approval to run a drone airline, and it plans to expand deliveries.
AP Photo/Tony Gutierrez

DALLAS (AP) — UPS says it has won government approval to run a drone airline, a first for a U.S. company, and it plans to expand deliveries on hospital campuses and eventually other industries. United Parcel Service, Inc. said Tuesday that its drone subsidiary was awarded an airline certificate last week by the Federal Aviation Administration.

Even before getting the airline designation, UPS Flight Forward, as the subsidiary is called, has operated more than 1,000 flights at Wake Forest University's medical center in Raleigh, North Carolina.

The designation removes limits on the size of the company's potential drone operation. Flight Forward can fly an unlimited number of drones, a key step toward expanding the operation. It can also fly drones at night — the company plans to do that after installing the necessary colored warning lights on each drone.

However, UPS still faces severe restrictions before it can run a large commercial operation with drones.

For example, drones won't be allowed to fly beyond the sight of the operator without an FAA exemption for each route. Also, each flight will need a separate operator. Scott Price, the company's chief strategy officer, said UPS will eventually apply for FAA permission to have a single operator fly multiple drones at the same time.

The airline certificate lets UPS fly drones carrying more than 55 pounds, "but we're not comfortable we have the hardware for that yet," Price said in an interview.

Operations will be limited to campus-like settings because FAA has not yet written regulations to allow commercial drone flights over populated areas. Price said UPS is eyeing "hundreds" of such sites in the U.S., including hospitals, colleges and office buildings.

Price said the Wake Forest experiment has been successful, with only "a few" drone flights canceled for mechanical problems or because of bad weather. He said none have crashed. With a special FAA exemption, the company operated a drone flight there on Friday beyond the sight of the operator, which Price said was a first for a revenue-generating delivery.

UPS believes the earliest commercially viable uses of drones will be for same-day deliveries, for augmenting truck-borne deliveries in rural areas, and for larger drones that could carry cargo of up to a ton from one rural area to another. Price said the latter idea is still years away. In a press release issued by the company, Transportation Secretary Elaine Chao said the airline designation, called a Part 135 certificate in FAA terminology, is a step forward in integrating drones into the U.S. airspace.