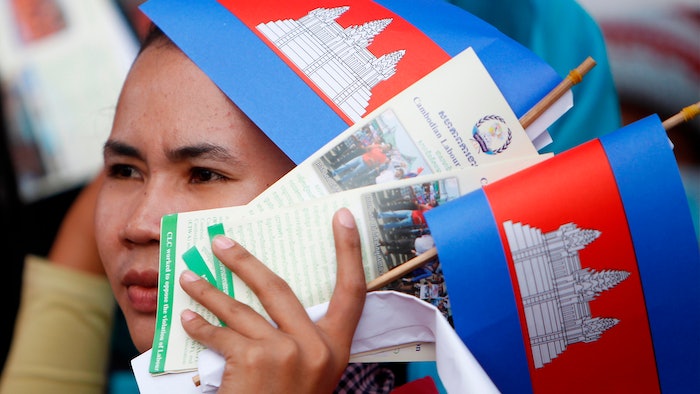 In this May 1, 2018, file photo, a worker participates during a gathering to mark May Day at Tonle Sap river bank, in Phnom Penh, Cambodia. Cambodia's government announced Friday it is raising the minimum wage for the garment industry, the country's biggest export earner, whose workers make up a powerful political bloc.
AP Photo/Heng Sinith, File

PHNOM PENH, Cambodia (AP) — Cambodia's government announced Friday that it is raising the minimum wage for the garment industry, the country's biggest export earner, whose workers make up a powerful political bloc.

The Ministry of Labor and Vocational Training said starting in January, the minimum wage will be raised 4.4% to $190 a month from $182. The increase falls short of the $195 a month requested by unions but is higher than the $186 suggested by factory owners.

The clothing and footwear industry is Cambodia's biggest export sector, employing nearly 800,000 people in about 1,000 garment and shoe factories. In 2018, the Southeast Asian country shipped nearly $10 billion worth of products to the United States and Europe.

The ministry said that once other benefits such as overtime pay are included in the calculations, workers will make an average of $207 to $218 per month.

Workers in the industry, clustered around the capital, Phnom Penh, and in export processing zones, are an important political force whose loyalty Prime Minister Hun Sen has been trying to woo.

In general, they have been supporters of what had been the main political party opposed to Hun Sen, who has held power for four decades. The workers' ability to mobilize in the streets has long been a concern for the government, with workers often playing a major role in political protests, not just labor campaigns.

During the campaign for last year's general election, Hun Sen held several big rallies with garment workers at which he made promises of generous benefits.

The election, which Hun Sen won, has been condemned by rights groups and many Western nations as unfair and undemocratic because the courts dissolved the only credible opposition, the Cambodia National Rescue Party, ahead of the polls. The government clamped down on the media and other critics as well.

Hun Sen's actions prompted the European Union to announce that it has begun the process of withdrawing preferential duty-free and quota-free status for imports from Cambodia. It said Cambodia has "severe deficiencies when it comes to human rights and labor rights."

The European action began a six-month monitoring process, and the withdrawal of privileges could be decided early next year if Cambodia fails to implement reforms.

Cambodia is one of a number of developing nations with which the EU has an "Everything but arms" scheme granting preferential access to the European market for products other than weapons.

As Cambodia's biggest industry, the garment sector would be greatly affected.

The Labor Ministry said the wage decision was made after two days of tense negotiations by a commission representing employers, workers and the government.

Pav Sina, chief of the Collective Union of the Movement of Workers, said the wage increase was acceptable while Cambodia's clothing and footwear sector faces the possibility of losing its European Union trade privileges.

"We hope that there will be more reforms to help lower the costs of doing business in Cambodia," he said. He thanked the government for reducing the number of public holidays by six days in 2020, an action supposed to boost productivity and competitiveness.