Anchors striking the oil pipelines are described as presenting an unacceptable risk to the Great Lakes. 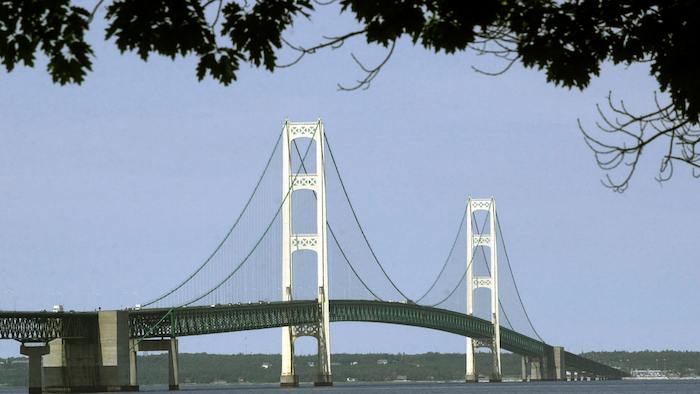 The bridge over the Straits of Mackinac.
AP Photo/Carlos Osorio

LANSING, Mich. (AP) — Michigan's attorney general sued Thursday to shut down twin 66-year-old oil pipelines in the Great Lakes, saying they pose an "unacceptable risk" and the state cannot wait five to 10 years for Enbridge Inc. to build a tunnel to house replacement pipes running through the Straits of Mackinac.

Democrat Dana Nessel's move came the same day she also sought to dismiss the Canadian company's request for a ruling on the legality of a deal it struck last year with former Republican Gov. Rick Snyder to encase a new segment of its Line 5 in the proposed tunnel. "I have consistently stated that Enbridge's pipelines in the Straits need to be shut down as soon as possible because they present an unacceptable risk to the Great Lakes," Nessel said.

Nessel said she acted after it became clear talks between Enbridge and Democratic Gov. Gretchen Whitmer had broken down. Whitmer was pushing to finish the tunnel in two years, while Enbridge was insisting it could not be done before 2024, when it would decommission the existing pipes. "The continued operation of Line 5 presents an extraordinary, unreasonable threat to the public because of the very real risk of further anchor strikes, the inherent risks of pipeline operations and the foreseeable, catastrophic effects if an oil spill occurs at the Straits," Nessel said.

The pipelines are part of Enbridge's Line 5, which carries 23 million gallons of crude oil and propane daily between Superior, Wisconsin, and Sarnia, Ontario.

Enbridge spokesman Ryan Duffy said decommissioning the pipes would result in a "serious disruption" to the energy market, saying the line meets 55 percent of Michigan's propane needs, including 65 percent used in northern Michigan and the Upper Peninsula. Refineries served by Line 5 also supply a large portion of the aviation fuel at Detroit Metro Airport.

"We remain open to discussions with the governor, and we hope we can reach an agreement outside of court," he said. "Enbridge is deeply committed to being part of Michigan's future. We believe the Straits tunnel is the best way to protect the community and the Great Lakes while safely meeting Michigan's energy needs."

Enbridge insists the dual pipes, which have been in place since 1953, are in sound condition and could operate indefinitely. But the company, based in Calgary, Alberta, said it is willing to install a tunnel in bedrock 100 feet beneath the lakebed and foot the estimated $500 million bill to eliminate virtually any possibility of a leak.

Opponents contend Enbridge's refusal to shut down the pipelines until the tunnel is completed means the Straits area would be endangered for at least another five years. They point to a vessel anchor strike in April 2018 that dented both pipes while damaging three nearby electric cables, which leaked 800 gallons of insulating mineral oil.

Nessel's suit, which was applauded by environmental groups and criticized by Republican lawmakers, identifies a potential anchor strike as the most significant risk to Line 5. It asks an Ingham County judge to rule that the operation of the Straits pipelines under a state easement violates the public trust doctrine, is a public nuisance and violates the Michigan Environmental Protection Act because it is likely to cause pollution and destroy water and other natural resources.

Earlier this year, Whitmer ordered her administration not to implement the tunnel plan after Nessel said authorizing legislation enacted in December violated the state constitution. "Although the governor remains willing to talk with Enbridge, her commitment to stopping the flow of oil through the Great Lakes as soon as possible — and Enbridge's decision to sue the governor rather than negotiate — will at some point require her to take legal action, as well," said spokeswoman Tiffany Brown.

Whitmer directed the Department of Natural Resources to review Enbridge's compliance with the 1953 easement. Enbridge said Thursday it asked Whitmer last week to resume talks, offering to suspend the lawsuit it filed earlier this month and jointly appoint an independent moderator to help facilitate discussions. The company also pointed to safety actions that have been taken to prevent anchor strikes.