Most of the money has already been earmarked for the creation of a center for addiction studies and treatment at Oklahoma State University. 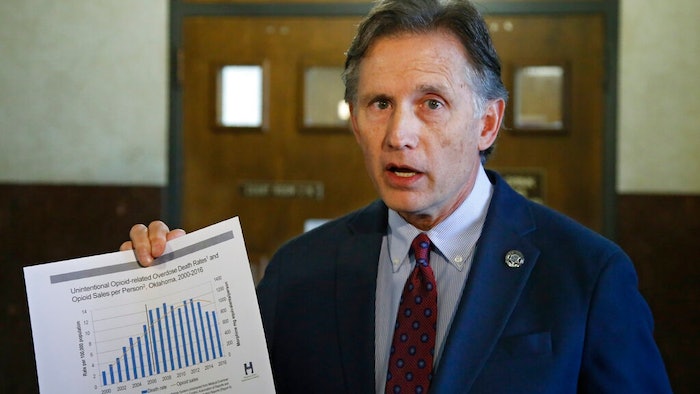 Oklahoma Attorney General Mike Hunter talks with the media during a break the Opioid trial in Norman, Okla., Wednesday, June 26, 2019. Oklahoma is wrapping up its presentation of evidence against Johnson & Johnson in the state's case alleging the consumer products giant and its subsidiaries helped fuel the deadly opioid crisis.
AP Photo/Sue Ogrocki

OKLAHOMA CITY (AP) — The U.S. government wants a portion of Oklahoma's $270 million settlement with Purdue Pharma that stemmed from the state's ongoing lawsuit against opioid makers.

The U.S. Centers for Medicare and Medicaid Services wrote to the head of Oklahoma's Medicaid agency that it has determined the federal government is entitled to part of Oklahoma's proceeds.

The June 12 letter from CMS' regional director Bill Brooks also seeks detailed information from the Oklahoma Health Care Authority and warns that failure to return a portion of the settlement money could result in the withholding of federal funds. Medicaid is jointly funded by the federal government and states.

Details of the letter were first reported Thursday by The Washington Post.

The Oklahoma Health Care Authority requested a 90-day extension from CMS to provide the federal agency with the requested information, and that request was granted this week, giving the state until Oct. 12 to provide its response.

It's not clear how much of the state's settlement the federal government is seeking or where the money would come from. Oklahoma's settlement in March with Purdue, the maker of OxyContin, and the company's controlling family called for nearly $200 million to go into a trust for the creation of a National Center for Addiction Studies and Treatment at Oklahoma State University in Tulsa. Private attorneys who handled the case for Oklahoma received about $60 million, while an additional $12.5 million was earmarked for local governments.

CMS says it is entitled to a portion of the funds under a provision of the federal Social Security Act that applies to money recovered by the state. A CMS spokesman says anytime the agency becomes aware of a settlement that might involve a Medicaid overpayment, the agency works with states to determine what portion may need to be returned to the federal government.

Federal agencies requesting a portion of such money is not unprecedented. In 2015, the federal government received half of a $1.375 billion settlement agreement with the rating agency Standard & Poor's Financial Services LLC, but in that case the U.S. Department of Justice was involved in the lawsuit, along with 19 states and the District of Columbia.

The letter did not reference Oklahoma's $85 million settlement with Israeli-owned Teva Pharmaceuticals or the state's ongoing public nuisance lawsuit against consumer products giant Johnson & Johnson. Witnesses for the state have suggested the cost of abating the opioid crisis in Oklahoma could be as much as $17.5 billion over the next 30 years.

The idea the state could be on the hook to pay millions of dollars to the federal government didn't sit well with Oklahoma state Rep. Mark McBride, R-Moore.

"As far as I'm concerned, that's the state's money," said McBride, one of several lawmakers critical of the way the Purdue settlement was structured. "It seems like the federal government is seeing that the attorney general won with these two settlements, and now they have their hand out, and I think that's just wrong."

After the Purdue settlement was announced, the Oklahoma Legislature approved a new law clarifying that any settlement proceeds go directly into the state treasury.

How to Divide Opioid Settlements