U.S. Air Quality is Slipping After Years of Improvement

There were 15% more days with unhealthy air in America both last year and the year before than there were on average from 2013 through 2016. 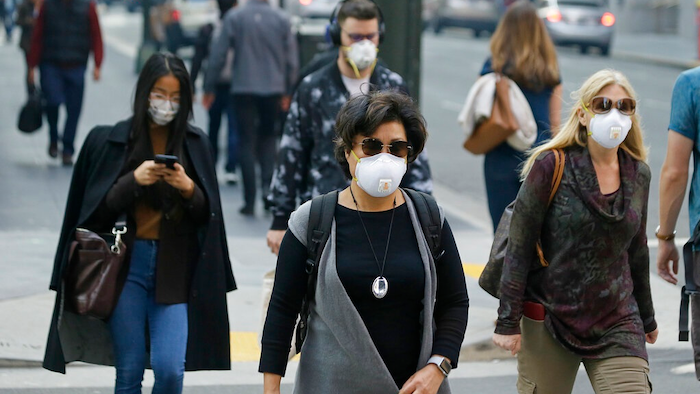 In this Friday, Nov. 9, 2018 file photo, people wear masks while walking through the Financial District in the smoke-filled air in San Francisco, as authorities issued an unhealthy air quality alert for parts of the San Francisco Bay Area as smoke from a massive wildfire drifts south. In 2017 and 2018, the nation had more polluted air days than just a few years earlier, federal data shows. While it remains unclear whether this is the beginning of a trend, health experts say it’s a troubling development.
AP Photo/Eric Risberg

After decades of improvement, America's air may not be getting any cleaner.

Over the last two years the nation had more polluted air days than just a few years earlier, federal data shows. While it remains unclear whether this is the beginning of a trend, health experts say it's troubling to see air quality progress stagnate.

There were 15% more days with unhealthy air in America both last year and the year before than there were on average from 2013 through 2016, the four years when America had its fewest number of those days since at least 1980.

President Donald Trump has repeatedly claimed just the opposite, saying earlier this month in Ireland: "We have the cleanest air in the world, in the United States, and it's gotten better since I'm president."

That's not quite the case. There were noticeably more polluted air days each year in the president's first two years in office than any of the four years before, according to new Environmental Protection Agency data analyzed by The Associated Press.

The Trump administration is expected to replace an Obama-era rule designed to limit emissions from electric power plants on Wednesday. Called the Clean Power Plan, it would have gradually phased out coal-burning power plants that emit both air pollutants and heat-trapping gases responsible for climate change.

Air quality is affected by a complex mix of factors, both natural and man-made. Federal regulations that limit the emissions of certain chemicals and soot from factories, cars and trucks have helped dramatically improve air quality over recent decades. In any given year, however, air quality can be affected by natural variations. That may be what's behind the stalled progress, scientists say.

"What you're seeing is a flattening off of progress as opposed to a major change in the wrong direction," said former deputy EPA administrator Bob Perciasepe, president of the Center for Climate and Energy Solutions.

But Trump is moving to loosen regulations on coal-fired power plants and cars that scientists credit for cleaner air, and he appears to be less stringent about enforcing current rules, according to data obtained by environmental advocates through the Freedom of Information Act.

Scientists say that it is too early to see the effects of changes in environmental policy of the Trump administration, which took office in January 2017.

But they say looser restrictions and lax enforcement would almost certainly reverse the gains that have been made in recent decades, potentially turning what has so far been a modest, two-year backslide into a dangerous trend.

"Today it feels like the future of our kids and our country is at stake," said former Obama EPA chief Gina McCarthy, now director of the Center for Climate, Health and the Global Environment at the Harvard School of Public Health. "We do not have the cleanest air and we have not crossed the finish line when it comes to pollution."

Five hundred and thirty-two American metro areas reported a total of 4,134 days in 2018 when the official air quality index passed 100, which means it is unhealthy for people with heart and lung disease, the elderly and the very young. That's about 15% more bad air days per city than the average for 2013 to 2016, America's clean air heyday.

The worst of the bad air days jumped even more. On average, in 2017 and 2018 there were nearly 140 times when a city's air pollution reached the worst two categories — "very unhealthy" and "hazardous" — with the air quality index greater than 200. That's more than two-and-a-half times the average of nearly 55 from 2013 to 2016. Last year, Riverside, California, topped the nation with 13 days in the worst two air quality categories and had the most bad air days of all types: 173.

About 100,000 Americans each year die prematurely because of polluted air, studies show.

El Paso, Texas, saw one of the biggest increases in bad air days from the mid-2010s among metro areas with at least 750,000 people. Like the rest of the country, El Paso has seen huge improvements in recent decades, but things have turned worse recently, and people say they notice.

El Paso first grade teacher Tonya Olivas said she's had to watch her son Joey more carefully. "If he's having issues with coughing excessively because of his asthma, I will pull him out of recess and P.E. I won't let him go outside," she said.

In an email, the EPA told The Associated Press the increase in unhealthy air days in 2017 "is largely associated with wildfires" in the west and it is studying 2018 before officially announcing its annual air trend data.

Air pollution experts agree wildfires likely have had a role, along with random variation, a stronger economy which leads to more consumption of fuels, and a changing climate. Higher temperatures increase the chances for fires and smog.

Even with the recent stagnation, there are far fewer bad air days now than in the early 2000s, 1990s and 1980s. Perciasepe said what's happening now is a "tug of war" between the worsening effects of warming on air quality and cleaner air from less coal use and more efficient cars.

But if regulations on coal plants, cars and other emissions are relaxed, the air quality will deteriorate, said Carnegie Mellon University engineering professor Neil Donahue.

"There is zero reason to expect any other outcome," he said.

London to Offer Alerts on Air Quality at Bus Stops