Thyssenkrupp said regulators' rejection of the merger was "a hard blow" for steelworkers. 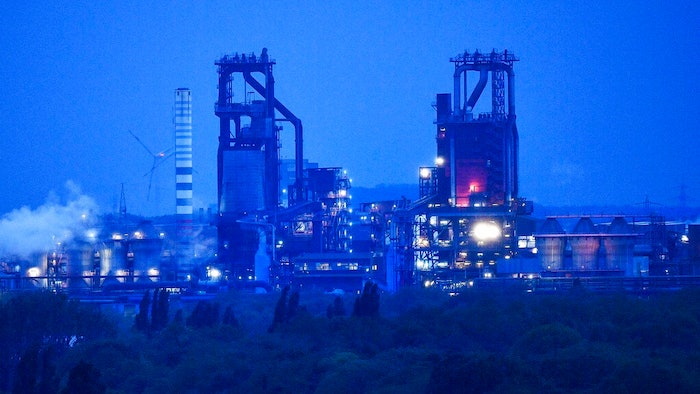 The furnace of German steelmaker Thyssenkrupp is illuminated in the evening twilight in Duisburg, Germany, Thursday, May 9, 2019. Steelmaking giant Thyssenkrupp of Germany says it expects European antitrust regulators to block its plan to combine its European operations with India's Tata Steel.
AP Photo/Martin Meissner

FRANKFURT, Germany (AP) — German steelmaker Thyssenkrupp said Friday it would cut some 6,000 jobs and restructure its businesses after saying that it expects European antitrust regulators to block plans for a joint venture with India's Tata Steel.

CEO Guido Kerkhoff said 4,000 of the lost jobs would be in Germany, the dpa news agency reported. He said the rejection of the joint venture was "a hard blow" for the company's 27,000 steelworkers.

Thyssenkrupp said in a statement that the companies had offered changes to address the European Commission's concerns but that hadn't been enough.

The Essen-based company said further concessions would have weakened the venture to such an extent that it would have no longer made business sense.

Thyssenkrupp responded to the rebuff by announcing a restructuring to increase profits. On top of the job reductions, management proposed to hold a share offering for its elevator business. The company also said it would abandon a plan to split itself into two companies that would hold shares in each other.

The company's personnel chief, Oliver Burkhard, said that the total number of job cuts included 2,000 positions that would have been eliminated if the two companies had been allowed to merge their European steel operations in a joint venture.