NYC to Be First U.S. City to Charge 'Congestion Toll'

The plan would use a network of license plate readers to bill vehicles for using surface roads anywhere in Manhattan south of Central Park. 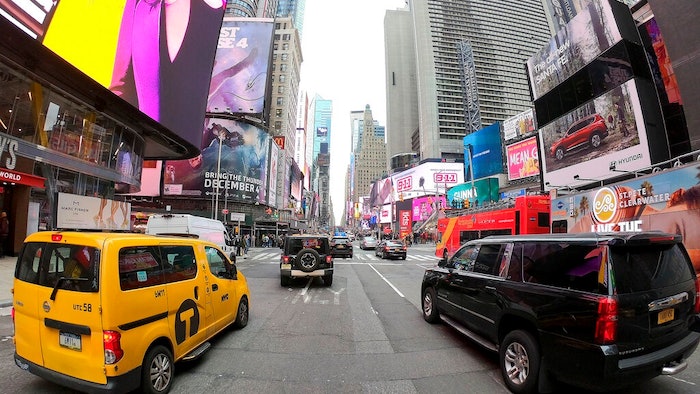 Motorists roll south on 7th Avenue in Times Square, Friday, March 29, 2019, in New York. A congestion toll that would charge drivers to enter New York City's central business district is a first for an American city. State legislators included it in the New York state budget that was approved Monday.
AP Photo/Julie Jacobson

NEW YORK (AP) — New York City is set to become the first American metropolis that seeks to ease traffic congestion, cut pollution and boost mass transit by charging motorists a hefty toll for the privilege of driving into its most crammed areas. So can it work?

If the experience of other cities around the world that have tried it is any indication, the answer appears to be yes. London, Singapore and Stockholm have all reported that "congestion pricing" systems similar to the one now being planned for Manhattan led to initial reductions in traffic and improvements in air quality, while creating a steady stream of revenue to support public transit and other infrastructure.

"New York is a prime example of cities where it tends to work, which is very high density, with relatively good public transportation" or at least the skeleton of a good system, said John Rennie Short, professor of public policy at the University of Maryland Baltimore County.

But critical questions still to be resolved that could determine what the experiment ultimately looks like and whether it is successful, experts said.

New York has to work out details of the plan, which would use a network of license plate readers to bill vehicles for using surface roads anywhere in Manhattan south of Central Park. That includes the cost of the toll, which is likely to be more than $10.

Will the tolls raise enough money to make the city's strained mass transit system reliable? Is there enough alternative transportation for commuters who decide to give up their cars? How will the tolling system affect the delivery trucks, taxis and ride-hail vehicles that now comprise a big proportion of Manhattan traffic? And will so many vehicles be made exempt from the tolls that the effect on travel patterns is minimal?

Mitchell Moss, director of the Rudin Center for Transportation Policy and Management at New York University, predicted that in the end the city might see only a modest decline in traffic, as people either absorb the cost and keep driving, or switch to services like Uber and Lyft.

"We're not going to see people abandon their cars to get into the subway," he said.

Primarily, he said, the system is likely to benefit the public transportation system, which now has a new source of revenue for much-needed repairs and upgrades.

"This is a terrific victory ... for the mass transit ridership and for New York's capacity to respond to the crisis of its mass transit system," he said.

New York state legislators approved a conceptual plan Monday for the tolling system, which would supplement an existing network of bridge and tunnel tolls that charge $9.50 to $15 for vehicles coming into Manhattan via seven of the 20 bridges and tunnels leading onto the island.

A panel will now be convened to set the toll prices — one recent proposal suggested around $12 for passenger vehicles — and create possible exemptions or credits for some drivers. That could include discounts for motorists already paying a toll enter Manhattan. The earliest the tolls could begin is Dec. 31, 2020.

One model for the system has existed since 2003 in London, which offers evidence that the system could work — and a cautionary note for how it may need to adapt over time.

Initially, London charged drivers 5 pounds, or about $6.50, to come into the central part of the city during the workweek.

The toll initially had a considerable effect. In its first year, congestion dropped 30%, buses got 6% faster and there was a 12% reduction in emissions.

In recent years, however, congestion has dramatically worsened, despite the fee rising to 11.50 pounds, about $15, per day. Officials say that was due in large part to the flood of app-based for-hire vehicles like Uber, which were initially exempt from the tolls. As a result, the city is lifting the exemption starting April 8.

In Stockholm, a pilot program that was put in place with less-than-enthusiastic public support in 2006 became much more popular as people saw immediate drops in congestion and air pollution, so much so that residents voted to make it permanent in 2007. Singapore's system has been around since the 1970s.

About 717,000 vehicles a day enter the Manhattan zone considered for the program, a recent city study said. One estimate said a congestion pricing plan with an $11.52 toll could reduce traffic by 13 percent and raise gross revenues of $1.1 billion per year, much of which would go to support trains and buses after expenses.

"Even a small reduction in traffic can have a substantial impact on the larger traffic network," said Kate Slevin, senior vice president of state programs and advocacy at Regional Plan Association, an advocacy organization that supports the congestion toll.

Asked about concerns over whether such a beleaguered transit system could even handle more riders if people decided not to drive into Manhattan, Slevin pointed out that transit officials have almost two years to take steps that will help, like redoing bus routes.

"The good news is there's going to be a couple of years before the congestion toll is turned on," she said.