The sanctions are seen as a way to ratchet up pressure on socialist President Nicolas Maduro to cede power to the U.S.-backed opposition. 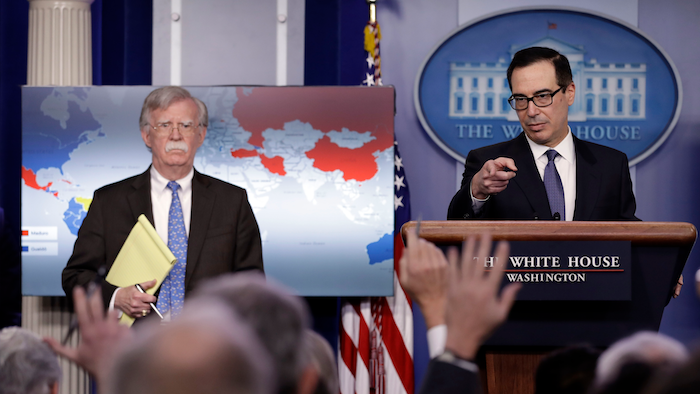 The action means Maduro's embattled government would lose access to one of its most important sources of income and foreign currency along with around $7 billion in assets of the state-owned company, Petroleos De Venezuela S.A. Hours after the White House announced the sanctions, Maduro went on state TV and called the U.S. action "immoral, criminal." In words directed at President Donald Trump, he said, "Hands off Venezuela!"

The sanctions follow the unusual decision by more than 20 countries, including the U.S., to recognize the opposition leader of the National Assembly, Juan Guaido, as the interim president of Venezuela. Maduro was re-elected last year in an election widely seen as fraudulent. The once prosperous nation has been in an economic collapse, with several million citizens fleeing to neighboring countries.

"We have continued to expose the corruption of Maduro and his cronies, and today's action ensures they can no longer loot the assets of the Venezuelan people," national security adviser John Bolton said at a White House news conference to announce the sanctions with Treasury Secretary Steven Mnuchin.

Bolton said he expects Monday's actions against PDVSA — the acronym for the state-owned oil company — will result in more than $11 billion in lost export proceeds during the next year.

Oil production — the lifeblood of Venezuela's economy — has been collapsing for years. Despite sitting atop the world's largest reserves, Venezuela currently pumps just a third of the 3.5 million barrels a day it did when the late Hugo Chavez took power in 1999.

The nation's refining capacity has also declined because of poor maintenance and lack of skilled personnel. That has left it reliant on Citgo, the Houston-based refining arm of PDVSA, to refine the oil and send gasoline back to Venezuela to meet domestic needs. "They have just lost that source," said Russ Dallen, managing partner of Caracas Capital, a brokerage company.

Venezuela is very reliant on the U.S. for its oil revenue, sending 41 percent of its oil exports to the U.S. Maduro can divert the roughly 500,000 barrels per day of oil currently being sold to Gulf Coast refineries to markets in Russia, China, India, Malaysia and Thailand.

But processing international financial transactions is hard without going through the U.S. or European banks. Transport costs would also jump because Venezuela's ports aren't well-equipped to load supertankers for transporting oil to distant markets.

That means the country, which depends almost entirely on oil exports for hard currency, will be able to purchase even less food and other imports, potentially worsening shortages and deepening its economic collapse.

Outside the PDVSA headquarters in Caracas, office workers lining up to board red company buses were seeking information about the immediate impact of the U.S. sanctions. As he hurried home with his two children, one employee told The Associated Press that the sanctions signaled tough times ahead.

"Things are going to get difficult," said the man, who refused to identify himself by name because he feared reprisals from the company. "The United States is one of the few buyers who pays for the oil up front, and it's probably where most of our income comes from."

Mnuchin said any money that U.S. entities use to buy Venezuelan oil will go into a blocked account in the United States, not the Maduro government. He said if PDVSA wants to see the sanctions lifted, there would have to be a speedy transfer of control to the interim, U.S.-backed president and a democratically elected government that is "committed to taking concrete and meaningful actions to combat corruption."

He said the Treasury Department has taken steps to allow refineries to continue importing oil from Venezuela temporarily. Also, he said Citgo will be able to continue importing oil as long as the revenue is sent to the blocked account in the United States. "This is a country that is very rich in oil resources," Mnuchin said. "There is no reason why these resources shouldn't be used for the economic benefit of the people there."

Mnuchin said he did not expect the sanctions would cause U.S. consumers to see higher prices at gas pumps.

The American Fuel & Petrochemical Manufacturers, which represents 95 percent of the refining sector, has lobbied hard during the past two years against any sanctions that would disrupt imports of Venezuelan oil. The association issued a statement saying it supported the Trump administration's goal to bring change to Venezuela.

"To that end, we will work with the administration to minimize any unnecessary disruptions or negative impacts to the market and American consumers," the association said.

Mnuchin insisted the sanctions would have only a "modest" impact on U.S. refineries because Venezuelan oil exports to the U.S. have declined steadily over the years, falling particularly sharply over the past decade as its production plummeted amid its long economic and political crisis.

The U.S. imported less than 500,000 barrels a day of Venezuelan crude and petroleum products in 2017, down from more than 1.2 million barrels a day in 2008, according to the Energy Information Administration.

Still, Venezuela has consistently been the third- or fourth-largest supplier of crude oil to the United States, and any disruption of imports could be costly for refiners. In 2017, the most recent year that data were available, Venezuela accounted for about 6 percent of U.S. crude imports. Valero and Citgo are among the largest importers of Venezuelan crude.