The accidents with delayed investigations include 15 involving aircraft that caused 21 deaths and two highway crashes, one of which killed seven people. 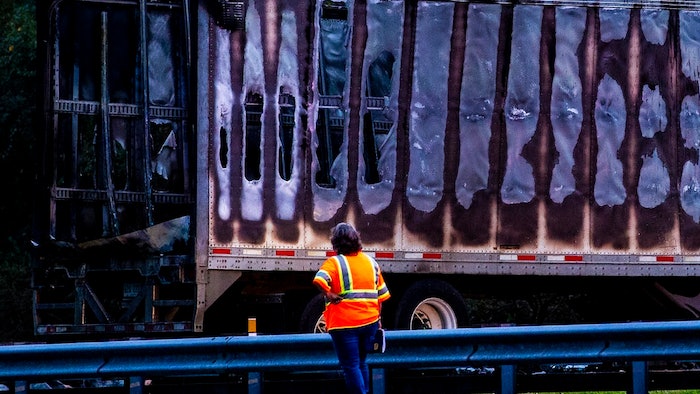 In this Thursday, Jan. 3, 2019, file photo, a worker looks at a charred semitrailer after a wreck with multiple fatalities on Interstate 75, south of Alachua, near Gainesville, Fla. The 35-day partial government shutdown stopped the National Transportation Safety Board from dispatching investigators to 22 accidents that killed 30 people, jeopardizing some perishable evidence, the agency said Monday, Jan. 28, 2019.
Lauren Bacho/The Gainesville Sun via AP, File

The NTSB will start investigations, but with some crashes now weeks old, critical lost evidence "potentially could prevent determination of probable cause for the accidents," the agency said in a statement.

The agency also did not have personnel to evaluate six other crashes to decide if teams should be sent out, and it didn't gather data on another 69 aviation cases, bringing the total number of delayed investigations to 97.

The safety board determines the cause of transportation accidents and makes recommendations to prevent them. It had to furlough 367 of 397 employees during the 35-day shutdown. Although it recalled six investigators, they worked without pay to support probes of three international aircraft crashes, the statement said.

The accidents with delayed investigations include 15 involving aircraft that caused 21 deaths, two on railroads resulting in two deaths, one marine accident that killed two, and two highway crashes, one of which killed seven people. Work also stopped on more than 1,800 aviation-safety investigations.

The highway crash that killed seven people occurred Jan. 3 on Interstate 75 near Gainesville, Florida. A church van packed with children from Louisiana was headed to Walt Disney World when it got caught in the fiery pileup involving two 18-wheelers. Seven people, including five of the youngsters and two truck drivers, died in the crash.

The other vehicle crash involved a tractor-trailer and a school bus in New Jersey in which 15 people were hurt, the NTSB said.

The NTSB is now deciding whether it should send investigators to the crash scenes, or just go directly to wreckage in storage facilities.

NTSB investigators will be hampered in their work by not seeing the crash sites, former NTSB Chairman Mark Rosenker said.

"Those are accidents that we really should have looked at and were not able to do that now because it's gone," he said. "Without physically having an opportunity to look at it yourself, you really don't get the exposure to it."

Rosenker said during shutdowns while he was on the board from 2003 to 2009, investigators were dispatched without pay. He called the latest delay in sending investigators unusual.

Unsafe Wiring May Cause Plane Fires