Consumers are expected to spend $57 billion per year worldwide on legal cannabis by 2027. 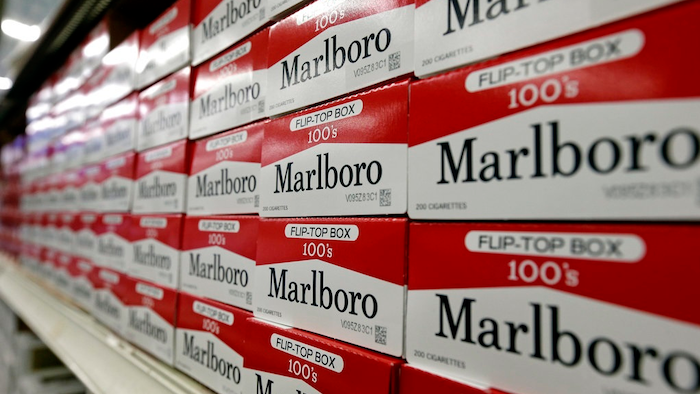 The maker of Marlboro cigarettes is joining some of the biggest names in beer in exploring the budding cannabis marketplace.

Altria, based in Richmond, Virginia, is one of the largest cigarette makers in the United States. The company said it had no comment on Cronos' announcement.

Altria joins beverage makers like Molson Coors, Constellation Brands and Heineken that already have announced moves in the cannabis space. Other big companies like Coca-Cola, Pepsi, Anheuser-Busch and Guinness brewer Diageo haven't acted yet, but have said they're watching closely as the market for marijuana and its extracts evolves.

The cannabis market is expected to rapidly grow as legalization expands in the U.S. and social norms change. On Tuesday, conservative Utah became the latest state to legalize marijuana use for medical purposes.

Consumers are expected to spend $57 billion per year worldwide on legal cannabis by 2027, according to Arcview Market Research, a cannabis-focused investment firm. In North America, that spending is expected to grow from $9.2 billion in 2017 to $47.3 billion in 2027.

Cigarette and beverage makers, in particular, want a stake in a market that could eat into demand for their traditional products. For example, a 2017 U.S. government survey showed daily marijuana use was exceeding daily cigarette use among high school students.

"We think that this is another very aligned category that's going to develop very fast and very large and it simply presents another opportunity for growth," Constellation Brands CEO Rob Sands said in a recent conference call with investors. In August, Constellation, which owns Corona beer and Manischewitz wine, invested $4 billion in exchange for a 38 percent stake in Canadian marijuana grower Canopy Growth.

Canada legalized recreational marijuana use this year, and it will allow food and drinks containing cannabis sometime next year. In the U.S., marijuana still is illegal at the federal level, but 10 states and the District of Columbia have legalized recreational marijuana for adults. Colorado and Washington were first in 2012 and Michigan is the latest after voters approved the idea last month.

A farm bill before Congress could also legalize industrial hemp at the federal level, which would further open the market for food, beverage and other companies.

Like marijuana, hemp comes from the cannabis plant but it contains less than 0.3 percent of THC, the compound that gives pot its high. But it does contain cannabidiol, or CBD, which some claim has calming and healing affects.

"You can't name a big, national-scale chain that isn't involved already or secretly getting involved," said Ryan Stroud, the co-founder and COO of Xanthic Beverages, an Oregon-based maker of beverages infused with CBD from evergreen bark. "They realize it's a race and they don't want to be left behind."

While some companies are quietly researching cannabis-infused products, others are making their intentions clear.

Earlier this year, Tilray Inc., a medical marijuana company in British Columbia, became the first cannabis business to trade on a major U.S. stock exchange. Its market value is quickly approaching $10 billion, about the same as The Gap or Macy's.

Molson Coors has set up a joint venture called Truss with Hexo Corp., another Canadian marijuana company. It says it will reveal more, including what sorts of products it will offer, early next year. And in California marijuana dispensaries, Heineken subsidiary Lagunitas is already selling sparkling water infused with CBD and its psychoactive cousin, THC.

Big corporations could help the cannabis market by funding research, standardizing products and providing distribution, said Giadha Aguirre De Carcer, the CEO of New Frontier Data, a cannabis research group. Right now, for example, there is no agreement on the dosage of CBD that should go into drinks or the rules for labeling.

"There is a lack of visibility in this space when it comes to consumer products," she said.

But Stroud says the appearance of multinational corporations on the scene is chilling for many mom-and-pop marijuana growers, who won't be able to make the transition from the counterculture to the corner office.

"A lot of people are still smoking grandpa's joint. That's about to change," he said.