Trump: EPA's Acting Chief Will be Named to Post Permanently

Andrew Wheeler's promotion would keep him as an effective agent in Trump's mission of rolling back environmental regulations.

Ellen Knickmeyer
EPA acting Administrator Andrew Wheeler, smiles as he is recognized by President Donald Trump during a Medal of Freedom ceremony in the East Room of the White House in Washington, Friday, Nov. 16, 2018. Also pictured is Education Secretary Betsy DeVos, left, and U.S. Trade Representative Robert Lighthizer, second from right. Wheeler, a former congressional aide and lobbyist who has led the EPA since his scandal-plagued predecessor resigned earlier this year, got Trump's nod for the permanent job. Trump made the announcement in passing at a White House ceremony for Presidential Medal of Freedom honorees.
AP Photo/Andrew Harnik

WASHINGTON (AP) — Andrew Wheeler, a former congressional aide and lobbyist who has led the Environmental Protection Agency since his scandal-plagued predecessor resigned earlier this year, has gotten President Donald Trump's nod for the permanent job.

Wheeler's promotion from acting to permanent EPA chief would keep him as a methodical and effective agent in Trump's mission of rolling back environmental regulations that the administration regards as burdensome to business. Environmental groups quickly voiced their opposition.

A veteran on Capitol Hill, Wheeler worked from 1995 to 2009 as a staffer for Republican Sen. Jim Inhofe of Oklahoma, a fervent denier of man-made climate change, and then for the Senate Environment and Public Works Committee.

Wheeler later worked as a lobbyist, including for coal giant Murray Energy Corp., which pushed hard at the outset of the Trump administration for coal-friendly policies from the EPA and other agencies.

The grandson of a coal miner, Wheeler told staffers in his first days as the agency's acting head this summer that he was proud of his roots in coal country. In the acting role, Wheeler has a reputation as a more open and cordial boss for employees than Pruitt was, and for producing regulatory rewrites more likely to stand up to court challenges.

Trump announced his plans for Wheeler almost in passing Friday at a White House ceremony for Presidential Medal of Freedom honorees.

Singling out Cabinet members in the audience at the ceremony, Trump got to Wheeler and said, "acting administrator, who I will tell you is going to be made permanent."

The White House said Trump was signaling his intent to nominate Wheeler. The nomination would require Senate confirmation. Senators approved Wheeler as the agency's deputy administrator in a 53-45 vote last April.

Since becoming acting EPA head, Wheeler has advanced proposals that would ease emissions limits for power plants, for cars and for oil and gas facilities, rejecting earlier EPA findings that some of the moves would lead to increased deaths from pollutants.

However, Wheeler also has slowed another Pruitt-era rollback that would have allowed trucks rigged with outdated, dirtier-burning engines to stay on the road.

"Compared to Administrator Pruitt, Mr. Wheeler is better," Sen. Tom Carper, a Delaware Democrat and one of the most consistent critics of Trump's EPA, said Friday in a statement after Trump's announcement.

"If the president intends to nominate Andrew Wheeler to be the administrator of EPA, then Mr. Wheeler must come before our committee so that members can look at his record as acting administrator objectively to see if any improvements have been made at the agency since he took the helm."

The EPA did not immediately respond to a request for comment Friday. Environmental groups condemned the announcement.

"In normal times, a zealous fossil fuel apologist and the top official in charge of protecting children's health from pollution would be two separate people with conflicting agendas," Ken Cook, president of the nonprofit Environmental Working Group, said in a statement. "But this is the Trump administration, where a former top coal lobbyist could become administrator of the EPA." 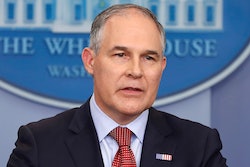 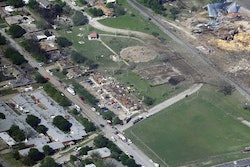 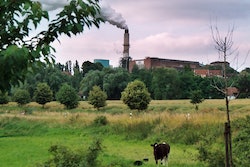