The company violated their no-deforestation promises because they were taking wood grown on land where the natural forest is being progressively cut down. 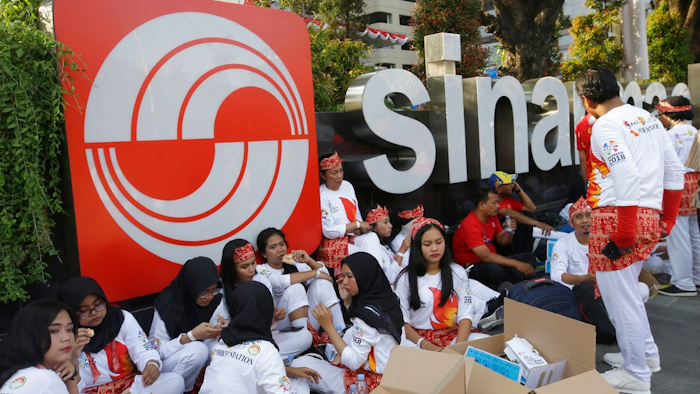 In this Aug. 5, 2018, photo, students sit in front of building that houses the headquarters of Sinarmas Group, one of Indonesia's largest palm oil company, in Jakarta, Indonesia. The main global group for certifying sustainable wood has suspended plans to give its influential endorsement to Indonesian paper giant Sinarmas after revelations it cut down tropical forests and used an opaque corporate structure to hide its activities.
AP Photo/Tatan Syuflana

JAKARTA, Indonesia (AP) — The main global group for certifying sustainable wood has suspended plans to give its influential endorsement to Indonesian paper giant Sinarmas after revelations it cut down tropical forests and used an opaque corporate structure to hide its activities.

The Forest Stewardship Council said Thursday that it had halted a process that could have enabled the Asia Pulp & Paper arm of Sinarmas to be readmitted to the organization.

The group said it is awaiting information from the conglomerate "related to its corporate structure and alleged unacceptable forest management activities" by companies thought related to it and wants full disclosure.

Three months ago, the council had sent a come clean ultimatum to Sinarmas, one of the world's largest paper companies, and its billionaire Indonesian family owners.

The conglomerate said Thursday that it has hired an accounting firm to carry out a "comprehensive assessment" of all industrial forest plantation companies in Indonesia that would be supervised by The Forest Trust, a corporate backed group that says it promotes transparency in supply chains. Its members include Asia Pulp & Paper. The assessment would resolve "ongoing and unsubstantiated allegations of using opaque ownership structures," Sinarmas said.

The FSC mark, a stylized tree, is sought by paper producers and other wood users as an endorsement they can use in the marketplace to promote their products as "green" and charge a premium. It is especially crucial for access to the lucrative North American market.

The group's suspension of its endorsement for Sinarmas comes after investigations by The Associated Press and the environmental news site Mongabay showed extensive ties between Sinarmas and plantation companies that the conglomerate had either denied any involvement with or described as independent suppliers.

One of those companies was cutting down tropical forest in West Kalimantan that was a habitat for critically endangered Bornean orangutans, a violation of the conglomerate's 2013 vow to end deforestation. Greenpeace, which had been advising Sinarmas on conservation, cut ties with the conglomerate.

Separately, on Wednesday, conservation groups released a report based on government wood utilization data that showed Asia Pulp & Paper had purchased wood from two plantation companies that have cleared a combined 32,000 hectares of natural forest since 2013. It also said another Indonesian conglomerate, Asia Pacific Resources International, usually known as April, had done the same.

The purchased wood was plantation grown, not natural forest. But the conservation groups said both companies were violating their no-deforestation promises because they were taking wood grown on land where the natural forest is being progressively cut down.

Asia Pulp & Paper said it had "quarantined" at one of its mills about 800 truckloads of wood bought from Fajar Surya Swadaya.