Almost everything about the deal is outlandish. 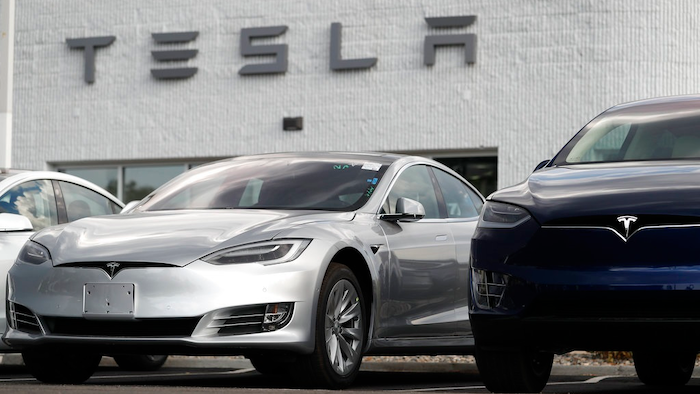 In this July 8, 2018, photo, 2018 Model 3 sedan sits next to a Model X on display outside a Tesla showroom in Littleton, Colo. Board members at Tesla are evaluating CEO and Chairman Elon Musk’s $72 billion proposal to take the electric car and solar panel maker private. Six of nine members say in a statement Wednesday, Aug. 8, that Musk began talking with the board about the move last week.
AP Photo/David Zalubowski

SAN FRANCISCO (AP) — Tesla CEO Elon Musk is seeking relief from the pressures of running a publicly held company with a $72 billion buyout of the electric car maker, but he may be acquiring new headaches with his peculiar handling of the proposed deal.

Almost everything about the deal is outlandish, from Musk's out-of-the-blue disclosure in a nine-word tweet to the assertion that he has lined up adequate financing to a buy a company that seems to burn through cash faster than it produces cars.

If Musk can pull it off, he will have burnished his reputation as an eccentric visionary who has been compared to Tony Stark, the billionaire playboy depicted by actor Robert Downey Jr. in the "Iron Man" movies.

But if the buyout flops, Musk and Tesla will likely face class-action lawsuits from shareholders alleging they were duped, and potential legal trouble from the Securities and Exchange Commission, too.

The SEC already has opened an inquiry into the wording and method of Musk's disclosure about the deal, according to a Wednesday report in The Wall Street Journal , which cited unidentified people familiar with the matter.

"It's very obvious that Musk did not talk to any lawyers before he made his tweet," said John Coffee Jr., a Columbia University law professor and corporate-governance expert.

Skepticism about the legitimacy of Musk's proposed deal surfaced almost immediately after Musk dropped the bombshell on his Twitter account a few hours after the stock market opened Tuesday.

"Am considering taking Tesla private at $420. Funding secured," Musk tweeted, without elaboration or any corroboration from the company.

It took about two hours before Tesla posted a Musk email to company employees on its website elaborating on his reasons for wanting to do the deal, making it clear he was serious. Before that happened, Tesla's stock had already soared. Trading in Tesla's stock was eventually halted until everyone could figure out what was going on.

It wasn't until Wednesday when six directors on Tesla's nine-member board publicly acknowledged that Musk approached them last week about pursuing the financing for a buyout that would take the company off the stock market.

Like Musk's tweet and email to employees, the directors' statement didn't contain details on how the buyout would be financed.

The murkiness of the financing could turn into a legal mine field for Musk and Tesla, according to both Coffee and former SEC lawyer Pete Henning, now a law professor at Wayne State University.

That's because Musk tweeted that the financing for the buyout had been locked up without equivocation. If there is an indication the financing is shaky, it almost certainly will expose the company and its CEO to allegations of market manipulation or fraud, Coffee and Henning said.

News of the potential buyout already has stung investors known as "short sellers" who have long been a thorn in Musk's side. Short sellers borrow company stock and then resell the shares in the open market in a bet that they will be able to replace them at a much lower price in the near future to repay their debt.

"If (Musk's) motive was frustration with short sellers, then that could be a case of market manipulation," Coffee said.

Those who believe Musk is carrying out a vendetta against short sellers may point to a May 4 tweet suggesting he might have something up his sleeve. "Oh and uh short burn of the century comin (sic) soon," he wrote.

Musk's use of Twitter to announce a huge deal also raised eyebrows, but that probably didn't violate any laws, Coffee and Henning said. The SEC has previously ruled that using social media to disclose company news is OK, as along as investors have been told that those channels may be used.

Even though Musk has 22.3 million followers on Twitter, Tesla probably should have ensured even wider distribution of the news by simultaneously posting information on its website and filing documents with the SEC, Coffee and Henning said.

Some of the fervor for a Tesla buyout faded Wednesday. Tesla's stock backtracked by more than 2 percent to close at $370.34.

One of the biggest questions surrounding the buyout is Tesla's long history of losing money while it has been investing in electric car technology and ramping up production of its vehicles.

The Palo Alto, California, company has only posted a quarterly profit twice in its history and has never made money during an entire calendar year, something that Musk has been trying to change by cutting costs, including recent mass layoffs that trimmed Tesla's workforce by 9 percent. Tesla lost another $717.5 million in its most recent quarter.

Musk has promised to begin making money on a consistent basis starting in the third quarter, escalating the pressure that he has already publicly acknowledged has taken an immense toll on him.

Just last week, he revealed he had been working 110 hours a week to deliver on short-term promises he had made to Wall Street, a load he traced to his boorish behavior toward two analysts earlier this year.

"It's very clear that he doesn't like to deal with being a CEO of a public company," said Gene Munster, a former stock market analyst who is now managing partner of investment fund Loup Ventures. "I am not sure it is beating him down, but I am sure he is sick of it."

By taking Tesla private, Musk believes that the company will be able to sharpen its long-term focus of revolutionizing an automobile industry dominated by fuel-combustion vehicles without having to cater to investors' fixation on how the business is faring from one quarter to the next.

Buying Tesla in its entirety would cost $72 billion, based on the company's outstanding stock as of July 27. But Musk probably doesn't need that much financing because he owns a roughly 20 percent stake in the company and he is also creating a special fund that will allow existing shareholders to retain their stakes in Tesla in the private market, if they want.

Munster estimates Musk will need $25 billion to $30 billion to buy out all the Tesla shareholders who want to sell at $420. Tesla also would likely need to borrow billions more to help pay for its ambitious plans of its electric vehicle line and its battery manufacturing plants.

In a Wednesday research note, Morgan Stanley analyst Adam Jonas estimated Tesla will end up taking on about $50 billion in additional debt if the company goes private.