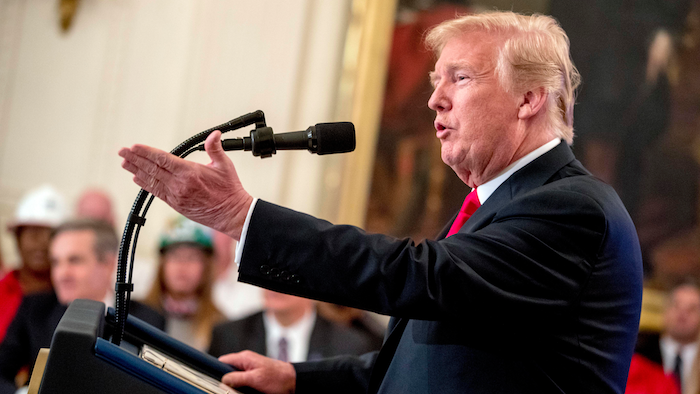 In this July 19, 2018 file photo, President Donald Trump speaks before signing an Executive Order that establishes a National Council for the American Worker during a ceremony in the East Room of the White House in Washington. Trump said he’s willing to hit all imported goods from China with tariffs, sending U.S. markets sliding before the opening bell, Friday, July 20. In a taped interview with the business channel CNBC, Trump said “I’m willing to go to 500,” referring roughly to the $505.5 in goods imported last year from China.
AP Photo/Andrew Harnik, File

President Donald Trump has indicated that he's willing to hit every product imported from China with tariffs and again criticized the Federal Reserve, as well as some of the nation's biggest trading partners.

In a taped interview with the business channel CNBC, Trump said "I'm willing to go to 500," referring roughly to the $505.5 billion in goods imported last year from China.

The administration to date has slapped tariffs on $34 billion of Chinese goods in a trade dispute over what it calls the nation's predatory practices.

China has retaliated with duties of its own, hitting U.S. imports of soybeans and pork. The administration July 10 announced a second possible round targeting $200 billion worth of goods. Beijing vowed "firm and forceful measures" in response.

Beijing is targeting sectors, like agriculture, that could harm Trump politically at home, though he said in the CNBC interview that he is seeking to do only what is fair.

"I'm not doing this for politics, I'm doing this to do the right thing for our country," Trump said. "We have been ripped off by China for a long time."

China does not have the wherewithal to match the U.S. on tariffs, but it has other tools.

China's central bank is allowing its tightly controlled currency to drift lower against the dollar, a move that could help Chinese exporters cope with U.S. tariff hikes. However, such a maneuver could also reignite an outflow of capital Beijing spent months trying to stanch.

Over the past three years, Beijing has gradually widened the narrow band in which the yuan is allowed to fluctuate, though regulators intervene regularly to guide its movement.

With trade tensions rising, so is the pushback in the U.S. from private business that see potentially devastating ramifications, not only from China, but from Europe, Canada, and other countries in Asia.

Trump has ordered Commerce to investigate whether auto imports pose a threat to U.S. national security that would justify tariffs or other trade restrictions. Earlier this year, he used national security as a justification for taxing imported steel and aluminum.

Trump has told reporters before that the U.S. could target all of China's imports.

For a second day, Trump criticized the Federal Reserve, breaking with a long-standing tradition at the White House in avoiding any influence, real or perceived, as to the actions of the nation's central bank.

The White House on Thursday attempted to ensure markets that the Fed maintains its independence after the CNBC interview was aired. In Friday, however, Trump again attacked the Fed, which is led by Jerome Powell, Trump's hand-picked choice.

In a Friday tweet, Trump said: "The United States should not be penalized because we are doing so well. Tightening now hurts all that we have done. The U.S. should be allowed to recapture what was lost due to illegal currency manipulation and BAD Trade Deals. Debt coming due & we are raising rates - Really?"

Last month, the Fed raised its benchmark rate for a second time this year and projected two more increases in 2018. Its rate hikes are meant to prevent the economy from overheating and igniting high inflation. But rate increases also make borrowing costlier for households and companies and can weaken the pace of growth. In particular, the Fed's most recent rate hikes could dilute some of the benefit of the tax cuts Trump signed into law last year.