Understanding the issues may help you decide whether to pay twice as much for a carton of organic milk or a dozen eggs. 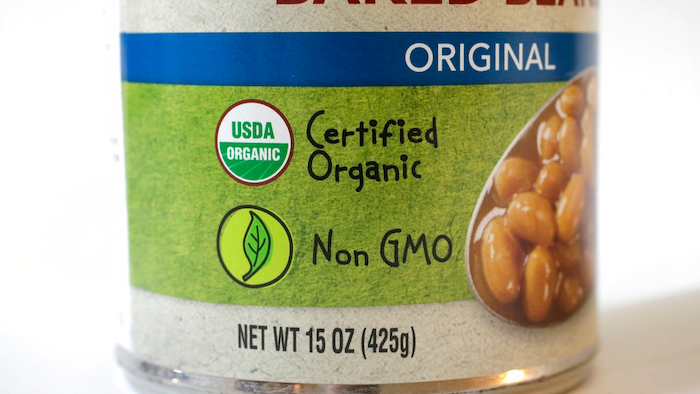 In this Monday, July 9, 2018 photo a "USDA Organic" label is printed on the label of a can of baked beans, in Walpole, Mass. The USDA Organic label generally signifies a product is made without synthetic pesticides and fertilizers, and that animals are raised according to certain standards. But disputes over the rules and reports of fraud may have some questioning whether the seal is worth the price.
AP Photo/Steven Senne

NEW YORK (AP) — Is paying more for organic milk, meat or a can of beans worth it?

The "USDA Organic" label generally signifies a product is made with relatively minimal synthetic pesticides and fertilizers, and that animals are raised according to certain guidelines. But disputes over the rules, and questions about adherence, may raise doubts about whether the price is justified.

A federal audit in September found the U.S. Department of Agriculture was "unable to provide reasonable assurance" that required documents for imported organic grains were reviewed at domestic ports of entry, among other weaknesses. The Washington Post last year had reported that massive shipments of the imported grains intended mostly for animal feed were wrongly labeled as organic, and also questioned practices by major organic dairy and egg producers.

Some farmers also say practices have strayed from the spirit of the rules about organic food, and are planning new labels.

A lot is at stake. Last year, organic food sales came to more than $45 billion, according to the Organic Trade Association, an industry group. That represented more than 5 percent of overall U.S. food sales.

WHAT YOU CAN DO

Understanding the issues may help you decide whether to pay twice as much for a carton of organic milk or a dozen eggs.

"The system in place isn't perfect, but that doesn't mean we shouldn't have this system, or that it isn't a good one," said Charlotte Vallaeys, a senior policy analyst with Consumers Union.

You may also be able to find more detailed information about specific products, either directly from producers or others such as the Cornucopia Institute, an industry watchdog that rates dairy and egg farms.

Ronnie Cummins, director of the Organic Consumers Association, says employees at food co-ops and smaller grocery stores may also be more knowledgeable about where products come from.

Regulators and organic food companies say they're working to address the challenges posed by the organic industry's growth and complexity.

The USDA says it's trying to adapt its system for oversight. Among the actions it outlined: Stepped-up inspections, coordination with other agencies and finding technologies to help it better track products across global supply chains.

The agency also notes organic corn imports from Turkey fell 35 percent between 2016 and 2017, which it suggests is the result of increased enforcement. The drop also highlights how pervasive problems may be.

The Organic Trade Association also says it's testing ways to detect fraud at select companies, and will fine-tune them before recommending the practices to its broader membership, which includes companies like Danone, Organic Valley and Stonyfield Farms.

An association spokeswoman, Gwendolyn Wyard, says a degree of fraud is likely in any program, but that tightening standards is a priority. "I'm not going to try to pull the wool over everyone's eyes and say we don't have work to do," Wyard said.

Milk producer Aurora Organic Dairy said the USDA reviewed its practices since the Washington Post report and found it to be in compliance with standards. Nevertheless, it said each of its farms have been certified twice to increase consumer confidence.

Given the disagreements over organic standards, the Real Organic Project says it is working on a label that it hopes would be an add-on to the USDA seal and indicate that additional rules were met, such as on living conditions for animals. The label, which is not yet being used, would also exclude produce from hydroponic farming, which relies on water instead of soil.

Danone Buys Organic Foodmaker for $10B