The quick surrender showed the power of Amazon. 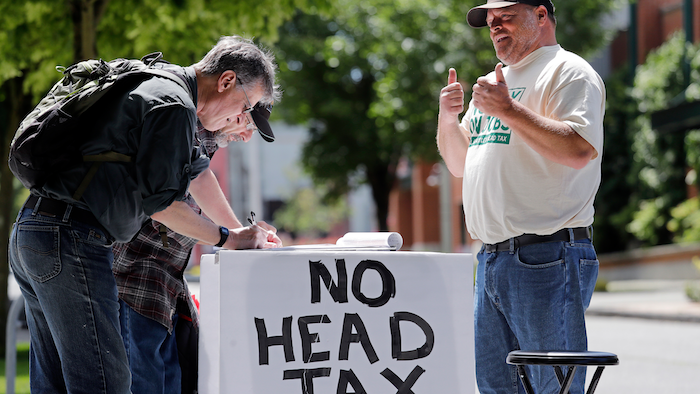 In this May 24, 2018, photo, paid signature gatherer John Ellard, right, gives thumbs-up as two men stop to sign petitions to put on the November ballot a referendum on Seattle's head tax, in Seattle. Seattle city leaders say they'll work to repeal the tax passed just last month on businesses such as Amazon and Starbucks designed to help pay for homeless services and affordable housing. Amazon and other businesses had sharply criticized the levy, and the online retail giant even temporarily halted construction planning on a new high-rise building near its Seattle headquarters in protest.
AP Photo/Elaine Thompson

SEATTLE (AP) — Seattle leaders said Monday that they plan to repeal a tax on large companies like Amazon and Starbucks as they face mounting pressure from businesses, an about-face just a month after unanimously approving the measure to help pay for efforts to combat a growing homelessness crisis.

The quick surrender showed the power of Amazon to help rally opposition and aggressively push back on taxes at all levels of government, even in its affluent home city where the income gap is ever widening and lower-income workers are being priced out of housing. It has resulted in one of the highest homelessness rates in the U.S.

A coalition of businesses is working to get a referendum on the November ballot to overturn the tax.

Mayor Jenny Durkan and seven of nine City Council members said they worked with a range of groups to pass a measure last month that would strike a balance between protecting jobs and supporting affordable housing.

But "it is clear that the ordinance will lead to a prolonged, expensive political fight over the next five months that will do nothing to tackle our urgent housing and homelessness crisis," they said in a statement.

"We heard you," they added, noting that they would move forward to repeal the so-called head tax. A special council meeting is scheduled Tuesday, where a vote is expected. They didn't provide a backup funding plan.

Amazon and other businesses had sharply criticized the tax, and the online retailer even temporarily halted construction planning on a new high-rise building near its Seattle headquarters ahead of the vote.

It marks the latest Amazon move against city, state and national taxes.

The company recently said it would block Australians from purchases on its international websites after the nation planned to impose a 10 percent consumption tax on online retailers for goods shipped to Australia.

The tax debate comes as 20 cities vie to lure the company's second headquarters and as it expands its workforce in Boston and Vancouver, British Columbia.

Cities have offered lavish tax breaks and incentives to lure the company and its promise of adding tens of thousands of high-paying jobs. Critics have said it is wrong for profitable company to push for public money, especially considering the added costs to infrastructure and services the new headquarters would bring.

Seattle's tax would charge companies about $275 per full-time worker each year and raise roughly $48 million a year for affordable housing and homeless services. It would target businesses making at least $20 million in gross revenue and take effect in January.

The liberal city spent $68 million on homelessness in 2017 and plans to spend $78 million this year.

Just days after Durkan signed the ordinance into law, the No Tax On Jobs campaign, a coalition of businesses, announced it would gather signatures to put a repeal referendum on the November ballot.

The campaign has raised about $285,000 in cash contributions, with more employers, including Amazon and Starbucks, pledging nearly $200,000 in additional support.

The coalition is glad the "Seattle City Council has heard the voices of the people loud and clear and are now reconsidering this ill-conceived tax," said John Murray, a spokesman with the No Tax on Jobs campaign.

Council member Teresa Mosqueda, one of four sponsors of the tax, said she could not support repealing the tax without "a replacement strategy to house and shelter our neighbors experiencing homelessness."

"We cannot wait months or until next year for another proposal or process while people are sleeping in our parks and on our streets," she said in a statement.

Council member Kshama Sawant said on Twitter that the repeal "is a capitulation to bullying by Amazon" and other big business" and called it a "backroom betrayal" that didn't involve her office.

The clash over who should pay to solve a housing crisis exacerbated by Seattle's rapid economic growth was marked by weeks of raucous meetings and tense exchanges that didn't abate after the tax was approved.

Opponents called the Seattle measure a tax on jobs and questioned whether city officials are spending current resources effectively. Others praised the tax as a step toward building badly needed affordable housing.

The Seattle region had the third-highest number of homeless people in the U.S. and saw 169 homeless deaths in 2017.