Environmental groups sued the U.S. Army Corps of Engineers in January, saying it violated the Clean Water Act when it approved a permit for the project. 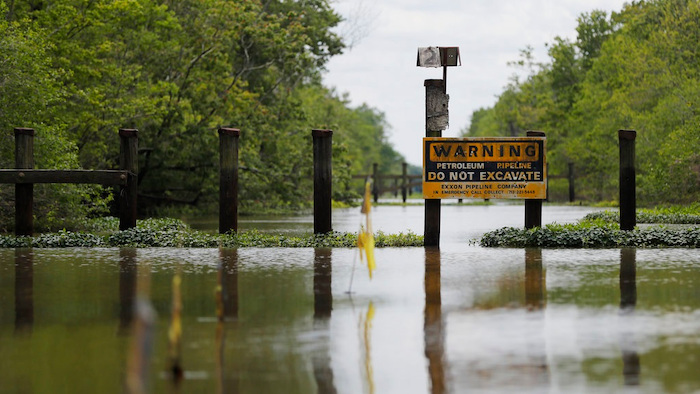 In this Friday, April 27, 2018 photo, a sign and barrier for an existing pipeline is displayed on Bayou Sorrel in the Atchafalaya River Basin in Louisiana. A company building a crude oil pipeline is asking a federal appeals court to throw out a judge's order that had suspended construction work in the environmentally fragile swamp. A three-judge panel of the 5th U.S. Circuit Court of Appeals is scheduled to hear arguments Monday, April 30, by attorneys for Bayou Bridge Pipeline LLC, federal regulators and environmental groups opposed to the project. In February, a judge temporarily stopped all pipeline construction work in the Atchafalaya Basin.
AP Photo/Gerald Herbert

HOUSTON (AP) — A company building a crude oil pipeline in Louisiana is asking a federal appeals court to throw out a judge's order that had halted construction work in an environmentally fragile swamp.

A three-judge panel of the 5th U.S. Circuit Court of Appeals is scheduled to hear arguments Monday from lawyers for Bayou Bridge Pipeline LLC, federal regulators and environmental groups opposed to the project.

Baton Rouge-based U.S. District Judge Shelly Dick sided with environmental groups in February and issued a preliminary injunction stopping all Bayou Bridge pipeline construction work in the Atchafalaya Basin until the groups' lawsuit over the project is resolved.

But a different panel from the appeals court agreed in March to suspend that order pending a final decision by the 5th Circuit.

Last month's ruling allowed the company to resume construction work. In an April 19 court filing, project manager Cary Farber said construction crews "mobilized" two days after the March 15 decision and resumed clearing a path for the pipeline through the wetlands. The company anticipated that approximately 95 of the 262 total acres in the pipeline's path through the basin will be cleared by the end of April, Farber said.

"This is in line with Bayou Bridge's planned construction schedule," he added.

Dick concluded the project's irreversible environmental damage outweighed the economic harm that a delay brought to the company. The judge said the project potentially threatens the hydrology of the basin and "poses the threat of destruction of already diminishing wetlands." She also agreed with environmental groups that centuries-old "legacy" trees can't be replaced once they're cut down.

But the appeals court's ruling last month said the company is likely to succeed on the merits of its claim that Dick abused her discretion in granting the injunction. Dick should have allowed the case to proceed "on the merits" and sought additional information about the "deficiencies" she identified in her ruling, the panel's majority opinion added.

Judge W. Eugene Davis dissented, saying he agreed with Dick that an environmental assessment of the project by the Corps did not comply with the National Environmental Policy Act.

Bayou Bridge Pipeline attorneys are urging them to reverse Dick's injunction, saying she "piled error on top of error to issue a fatally flawed" order.

Government lawyers said the Corps analyzed the pipeline's environmental impacts in "great detail" and required the company to protect more than 700 acres (2.8 sq. kilometers) of wetlands before it could begin work on the project.

The basin accounts for approximately 25 miles (35 kilometers) of the pipeline's 162-mile-long (260-kilometer) path from Lake Charles to St. James Parish. Dick's order only applied to the basin and didn't prevent the company from working elsewhere along the pipeline's route.

The basin is the nation's largest river swamp and includes roughly 880,000 acres (3,560 sq. kilometers) of forested wetlands, according to the groups' lawsuit.

Bayou Bridge Pipeline LLC is a joint venture of Energy Transfer Partners and Phillips 66. Energy Transfer Partners built the Dakota Access pipeline, a project that sparked a string of violent clashes between protesters and police in North Dakota in 2016 and 2017. The Bayou Bridge pipeline is the last link in a pipeline network connecting the Bakken oil fields in North Dakota with Louisiana refineries and export terminals.