The company made at least $78 million through illegal imports, including counterfeit versions of cancer drugs that had no active ingredient. 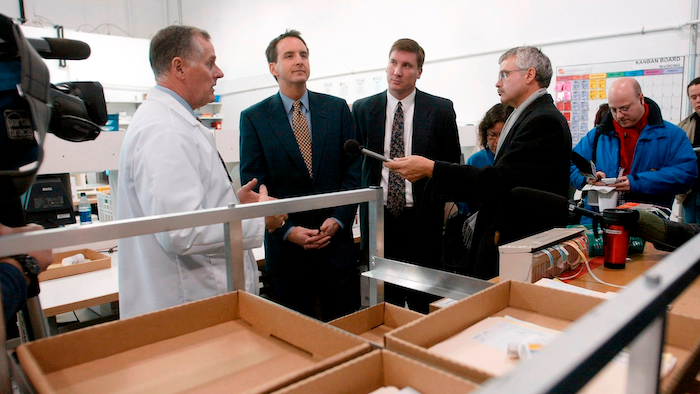 HELENA, Mont. (AP) — An online pharmacy that bills itself as Canada's largest was fined $34 million Friday for importing counterfeit cancer drugs and other unapproved pharmaceuticals into the United States, a sentence that one advocacy group called too light for such a heinous crime.

Canada Drugs has filled millions of prescriptions by offering itself as a safe alternative for patients to save money on expensive drugs, and its founder, Kris Thorkelson, has been hailed as an industry pioneer for starting the company in 2001. But U.S. prosecutors say Canada Drugs' business model is based entirely on illegally importing unapproved and misbranded drugs not just from Canada, but from all over the world. The company has made at least $78 million through illegal imports, including two that were counterfeit versions of the cancer drugs Avastin and Altuzan that had no active ingredient, prosecutors said.

After more than two years of struggling to get the international company to appear in U.S. court to face the felony charges, Canada Drugs and Thorkelson, struck a plea deal with prosecutors late last year. On Friday, a judge in Missoula, Montana, approved federal prosecutors' recommended sentences that include $29 million forfeited, $5 million in fines and five years' probation for Canada Drugs.

U.S. District Judge Dana Christensen also sentenced Thorkelson to six months' house arrest, five years' probation and a $250,000 fine. Canada Drugs also will permanently cease the sale of all unapproved, misbranded and counterfeit drugs and will surrender all of the domain names for the myriad websites it used to sell the drugs, under the deal.

An advocacy group had urged the judge to impose harsher penalties to deter future crimes.

"Counterfeiting oncology medications is a nearly untraceable and heinous health care crime," Shabbir Imber Safdar, executive director of the Partnership for Safe Medicines, wrote in a letter to the judge. "You put saline in a bottle, and when the cancer patient takes it, there is no evidence in the patient of the crime." After the sentencing, Safdar called the penalties "a slap on the wrist and an insult to the victims of Canada Drugs' crimes."

Safdar said Thorkelson should receive prison time and that Thorkelson's and Canada Drugs' pharmacy licenses should be surrendered. The group also wants Canada Drugs to give up all of its internet domain names, including ones not named in the plea deal, to prevent the company from continuing to sell misbranded and counterfeit medicine.

Federal prosecutors wrote in court documents that the recommended sentence is appropriate. U.S. Attorney for Montana Kurt Alme said after the sentencing that Thorkelson and Canada Drugs jeopardized the health and safety of Americans by circumventing the Food and Drug Administration's approval process.

"As this case shows, American providers and consumers need to beware when purchasing drugs on the internet," Alme said in a statement.

The case is being handled in the U.S. state of Montana, where Canada Drugs bought another company for its drug inventory and customer list when it was expanding in 2009. Canada Drugs continued to deposit money into that company's Montana bank account from doctors' purchase of the illegally imported drugs before the proceeds were shipped to offshore accounts in the Caribbean, prosecutors said.

Thorkelson pleaded guilty to knowing about and concealing a felony crime.