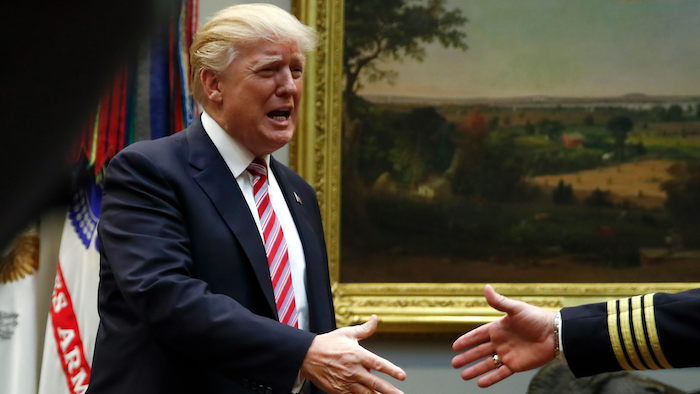 President Donald Trump shakes hands with Immediate Past President of the National Sheriffs' Association, St. Charles Parish, La., Sheriff Greg Champagne, as he arrives for a roundtable discussion with members the National Sheriffs' Association and others in the Roosevelt Room of the White House in Washington, Tuesday, Feb. 13, 2018.
AP Photo/Carolyn Kaster

The White House's 2019 spending plan seeks to reduce or eliminate climate science programs across an array of federal agencies, from gutting efforts to track greenhouse gas emissions and research to eliminating funding for NASA satellites that study the impacts of climate change.

Though President Donald Trump's budget unveiled earlier this week is highly unlikely to be adopted by Congress, it is a direct indicator of just how little weight his administration is giving to the increasingly dire warnings from climate scientists about longer droughts, stronger storms and rising seas.

In the 160-page budget summary released by the White House, the term "climate change" is only mentioned once — in the name of a science program marked for elimination at the Environmental Protection Agency. A week after EPA Administrator Scott Pruitt suggested global warming might be beneficial to humanity, his agency issued a 47-page strategic plan for the next five years that does not include the word "climate."

Asked about the absence of climate change in the budget and the strategic plan, EPA spokesman Jahan Wilcox said the agency will focus on its core goals which "are designed to transform the way the agency does business and more efficiently and effectively delivers human health and environmental results."

Federal health and climate scientists predict that by the end of this century global warming will add as many 9,000 deaths a year in the U.S. because of heat, costing as much as $140 billion a year. Hot weather promotes the spread of infectious diseases, reduces work capacity, increases rates of violent crime, reduces agricultural production and worsens air quality.

Environmentalists say the deep budget cuts, if implemented, would amount to suppressing facts about global warming while turning up the Earth's thermostat by pumping more greenhouse gases into the atmosphere.

"Trump's budget is a statement of his priorities, and this budget demonstrates that he could care less about protecting clean air, clean water, public health or our public lands," said Michael Brune, executive director of the Sierra Club. "This is a shameful, ideological document that represents the extent to which Trump has fully given himself over to corporate special interests above all else."

Trump's proposed budget for EPA eliminates $16.5 million in funding and 48 full-time jobs at the Global Change Research program, which develops scientific information related to climate change and its impacts on human health, the environment and the economy. Also zeroed out is $66 million for the Atmospheric Protection Program, a collection of climate-related partnerships seeking voluntarily air pollution reductions by private companies.

EPA's Atmospheric Protection Program, tasked with completing an annual U.S. inventory of greenhouse gas emissions to fulfill international climate treaty obligations would be slashed from $103 million to less than $14 million, a reduction of about 87 percent. The White House would also eliminate the Science to Achieve Results program, which provides $28 million in research grants and academic fellowships in environmental science and engineering.

At the National Oceanic and Atmospheric Administration, money for climate-related research would be cut by more than one third, to $99 million. That includes eliminating research programs to better understand the Earth climate system and research into decreases in Arctic sea ice. Trump's budget also seeks to cancel five Earth-observing satellites costing about $133 million in 2019. That includes a satellite designed to monitor Earth's carbon cycle, which is key to tracking climate change.

Meanwhile, the White House is promoting what Trump has dubbed an "energy dominance" strategy, emphasizing increased investments in oil, gas and coal. At the Department of Energy, research into new renewable energy technologies is shifting to boost research into fossil fuels.

The budget for the Department of Interior seeks to ramp up drilling and mining on federally owned land while repealing an Obama-era rule requiring oil and gas operations to reduce leaks of methane, a potent greenhouse gas that traps about 25 times more heat in the atmosphere than carbon dioxide.

"The president's budget is the textbook definition of 'pennywise, pound foolish,'" said Shana Udvardy, a spokeswoman for the Union of Concerned Scientists. "Natural disasters do more damage because of climate change, and 2017 was unprecedented for deadly extreme weather events."