Companies that install solar-power systems for homeowners and utilities are bracing for Trump's call on whether to slap tariffs on imported panels. 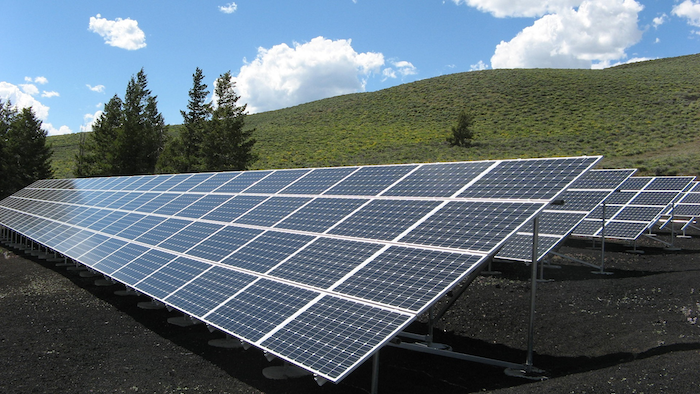 DALLAS (AP) — Some in the U.S. solar-power industry are hoping a decision this week by President Donald Trump doesn't bring on an eclipse.

Companies that install solar-power systems for homeowners and utilities are bracing for Trump's call on whether to slap tariffs on imported panels.

The solar business in the U.S. has boomed in recent years, driven by falling prices for panels, thanks in part to cheap imports. That has made solar power more competitive with electricity generated from coal and natural gas.

A green-technology research firm estimates that tariffs could cost up to 88,000 U.S. jobs related to installing solar-power systems.

On the other side are two U.S. subsidiaries of foreign companies that argue the domestic manufacturing of solar cells and modules has been decimated by a flood of imports, mostly from Chinese companies with operations throughout Asia.

The four members of the U.S. International Trade Commission — two Republicans and two Democrats — unanimously ruled in October that imported panels are hurting American manufacturers, although they differed on exactly how the U.S. should respond. Trump has until Friday to act on the agency's recommendations for tariffs of up to 35 percent.

Trump has wide leeway — he can reject the recommendations, accept them, or go beyond them and impose tougher tariffs. Congress has no authority to review or veto his action. Countries harmed by his decision could appeal to the World Trade Organization.

The trade case grew out of a complaint by Suniva Inc., a Georgia-based subsidiary of a Chinese company, which declared bankruptcy last April. Suniva was joined by SolarWorld Americas, the U.S. subsidiary of a German company. Both blame their difficulties on a surge of cheap imports, mostly from Asia. Suniva wants higher tariffs than those recommended by the trade commission.

The U.S. Commerce Department imposed stiff anti-dumping duties on imported panels made from Chinese solar cells in 2012. Tim Brightbill, SolarWorld Americas' lawyer, said Chinese companies have gotten around those sanctions by assembling panels from modules produced in other Asian countries such as Malaysia and Vietnam. That makes the current trade case even more important, he said.

"It is a global case. It addresses the global import surge," Brightbill said. "We need the strongest possible remedies from President Trump to maintain solar manufacturing here in the United States."

A consultant for SolarWorld said tariffs on imports could create at least 12,000 jobs and up to 45,000 depending on capacity growth, and that installer jobs would also increase.

While U.S. solar manufacturing has shriveled, installations — from home rooftops to utility-scale operations — have boomed. Installations have soared more than tenfold since 2010, with the biggest jump coming in 2016, after prices for solar panels collapsed.

The Solar Energy Industries Association, a trade group for U.S. installers, says tariffs would drive up the cost of installing solar-power systems, leading to a drop in demand.

"We are selling energy that can be created by wind, by natural gas, by hydro, by coal, by nukes. When you raise the price of what we are selling, we can't compete," said Abigail Ross Hopper, the group's president.

Jim Petersen, CEO of PetersenDean, a California company that installs solar rooftop panels mostly for residential customers, once favored tariffs on imported panels, which he found to be of inferior quality. He has changed his mind.

"This is bad for American jobs, bad for the consumer," he said.

In the New Mexico desert, Albuquerque-based Affordable Solar is working on a $45 million solar farm to help power a massive new data center for Facebook. The company's president, Kevin Bassalleck, said tariffs would hurt homegrown companies that make racks, tracking systems and electronics that are part of a power system. He said jobs at those companies are hard to outsource.

"If you ever set foot in a solar module assembly factory, most of what you see are robots. There are very few people," he said. "But if go out on to any one of our project sites like the Facebook project, you would see a small army of people working and installing things."

U.S. Sen. Martin Heinrich, a New Mexico Democrat and advocate for renewable energy, says his state could lose more than 1,500 jobs by 2020 if tariffs are imposed, and tariffs won't revive U.S. solar manufacturing.

"The jobs that have been lost because of cheaper solar cells have already been lost," Heinrich said in an interview. "These tariffs are then going to take the very rapidly growing, successful, good jobs that we have built in manufacturing of the other equipment, in installing, and reduce those jobs to a fraction of what they should be."