Some drillers are finding the need to restrict oil output at some wells to meet gas flaring rules. 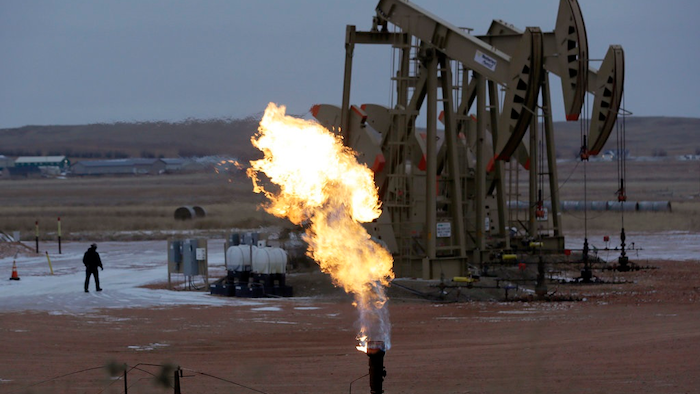 In this Oct. 22, 2015, file photo, workers tend to oil pump jacks behind a natural gas flare near Watford City, N.D. Fearing sanctions by the state, some North Dakota oil drillers have begun cutting output to control the amount of natural gas that's being burned off at well sites and wasted as a byproduct of crude production, industry and state officials say.
AP photo/Eric Gay, File

BISMARCK, N.D. (AP) — Fearing sanctions by the state, some North Dakota oil drillers have begun cutting output to control the amount of natural gas that's being burned off at well sites and wasted as a byproduct of crude production, industry and state officials say.

Pipeline capacity is adequate to move the natural gas to market, but it's the lack of gas-gathering and processing facilities in between that's the problem. That forces some drillers to restrict oil output at some wells to meet gas flaring rules, said Ron Ness, president of the North Dakota Petroleum Council.

"We don't want to be restricted by the state," said Ness, whose group represents hundreds of companies working in North Dakota's oil-producing region.

Ness said an industry group task force is being formed this month to pinpoint where gas-gathering and processing infrastructure is needed most.

The rules that went into effect in 2014 allow regulators to set production limits on oil companies if the targets aren't met. Companies that fail to meet the goals could have production at a well limited to as little as 100 barrels a day, depending on the amount of gas flared.

The rules that were adopted by the state and endorsed by the industry require oil companies to capture 85 percent of the gas by 2016, and 90 percent by 2020. They came after as much of a third of the gas went up in smoke, drawing criticism from environmentalist and many residents who said the state was losing revenue from the wasted gas, and that it contributed to unnecessary carbon dioxide emissions.

Less than 1 percent of natural gas is flared from oil fields nationwide, and less than 3 percent worldwide, the U.S. Energy Department said. North Dakota drillers in November burned off, or flared, about 14 percent of the gas, said Alison Ritter, a spokeswoman for the Department of Mineral Resources, which regulates the state's oil and gas industry.

Oil production in North Dakota, the second-biggest oil producer behind Texas, rose slightly in November to 1.19 million barrels daily and remained above 1 million barrels per day for the 10th consecutive month. A record 1.2 million barrels was produced in December 2014, but had been declining amid weakened oil prices.

The price for North Dakota sweet crude topped $60 a barrel in late December and for the first time since 2015. Fifty-six oil rigs were drilling Tuesday, up 20 from a year ago.

But full exploitation of the state's oil patch likely will be hamstrung unless infrastructure is built quickly, regulators say.

"Without additional investment in terms of gathering and processing, the industry is running up against it," Ritter said. "It's all kind of a race."

Kringstad, the pipeline authority director, said three gas processing plants are proposed in the next two years, though even if they are built, they would just "keep up" with expected production.

The discord comes just months before the first ever European climate law is adopted.
Oct 15th, 2020
Follow Us
Most Recent