It could be up to a 70 percent jump in price. 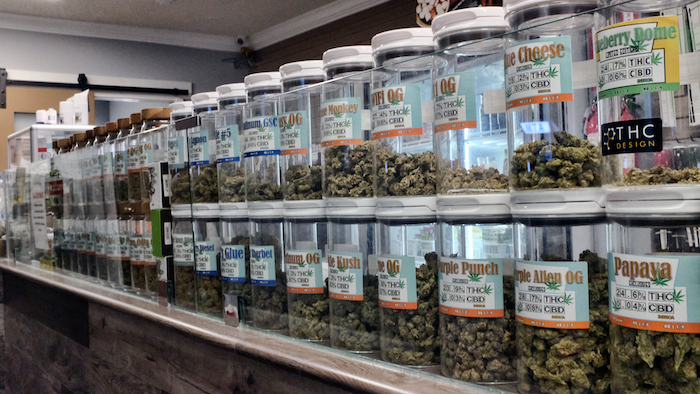 This Friday, Nov. 3, 2017 photo shows jars of medical marijuana on display on the counter of Western Caregivers Medical marijuana dispensary in Los Angeles. Consumers eager for the coming of California's legal recreational marijuana market should be ready for sticker shock. An array of new taxes and fees will be attached to pot sales, driving up prices.
AP Photo/Richard Vogel

LOS ANGELES (AP) — California's legal marijuana marketplace is coming with a kaleidoscope of new taxes and fees that could influence where it's grown, how pot cookies and other munchies are produced and the price tag on just about everything.

Be ready for sticker shock.

On a retail level, it costs about $35 to buy a small bag of good quality medical marijuana in Los Angeles, enough to roll five or six joints.

But in 2018, when legal sales take hold and additional taxes kick in, the cost of that same purchase in the new recreational market is expected to increase at the retail counter to $50 or $60.

At the high end, that's about a 70 percent jump.

Medical pot purchases are expected to rise in cost too, but not as steeply, industry experts say.

Or consider cannabis leaves, a sort of bottom-shelf product that comes from trimming prized plant buds. The loose, snipped leaves are typically gathered up and processed for use in cannabis-laced foods, ointments, concentrates and candies.

Growers sell a trash bag stuffed with clippings to manufacturers for about $50. But come January, the state will tax those leaves at $44 a pound.

That means the tax payment on a bag holding 7 or 8 pounds would exceed the current market price by five or six times, forcing a huge price hike or, more likely, rendering it essentially valueless.

"All it would become is compost," predicted Ryan Jennemann of THC Design in Los Angeles, whose company has used the leaves to manufacture concentrated oils.

Governments struggling to keep up with the cost of everything from worker pensions to paving streets are eager for the cascade of new tax money from commercial pot sales that could eventually top $1 billion statewide.

But higher taxes for businesses and consumers give the state's thriving illicit market a built-in advantage. Operators in the legal market have been urging regulators to be aggressive about shutting down rogue operators.

Donnie Anderson, a Los Angeles medical cultivator and retailer, predicted the higher level of state taxation next year is "just going to help the illicit market thrive." He said more needs to be done to cut the cost, especially for medical users, many of whom won't be able to absorb a price jump.

The increased tax rates are just one part of California's sprawling plan to transform its long-standing medical and illegal markets into a multibillion-dollar regulated economy, the nation's largest legal pot shop. The reshaping of such an expansive illegal economy into a legal one hasn't been witnessed since the end of Prohibition in 1933.

The change has come haltingly. Many cities are unlikely to be ready by Jan. 1 to issue business licenses, which are needed to operate in the new market, while big gaps remain in the system intended to move cannabis from the field to distribution centers, then to testing labs and eventually retail shops.

The path to legalization began last year when voters approved Proposition 64, which opened the way for recreational pot sales to adults. Medical marijuana has been legal in California for about two decades.

Come January, state taxes will include a 15 percent levy on purchases of all cannabis and cannabis products, including medical pot.

Local governments are free to slap on taxes on sales and growing too, and that has created a confusing patchwork of rates that vary city to city, county to county.

In the agricultural hub of Salinas, southeast of San Francisco, voters approved a tax that will eventually rise to $25 a square foot for space used to cultivate the leafy plants, a rate that's equivalent to about $1 million an acre.

But farther north, in the pot-growing mecca of Humboldt County, rates will be a comparative bargain, ranging from $1 to $3 for a square foot for cultivation space.

By some estimates Humboldt County has up to 15,000 unregulated pot grows, and Supervisor Ryan Sundberg said he was eager to fashion a tax scheme that would encourage cultivators to come into the legal system and adhere to environmental regulations.

"A high tax rate, that would be one more barrier to getting people regulated," he said.

Lower-tax areas could also be a lure to businesses looking to save on costs.

Here's a snapshot of how new taxes will roll out for an average consumer in Los Angeles:

Currently, for legal medical pot, there is no specific state tax on cannabis and the city tax is 6 percent, which is usually incorporated into the sale price at the counter.

When the recreational market opens in January, an eighth-ounce bag that sells for $35 will be subject to a 15 percent state tax. A city business tax that typically gets passed on to consumers will add another 10 percent, and then the buyer will be hit with the usual sales tax, about 10 percent in L.A.

Businesses are being saddled with new taxes and costs on cultivation, distribution and testing, which will be rolled into the consumer price.

Together, operators say, that will push retail prices to $50 or $60 for that eighth-ounce purchase.

As for medical, the city tax would be lower, 5 percent, but retailers say that's sometimes not passed on to the consumer. Consumers with a valid medical marijuana identification card would not pay sales taxes.

A report last week from financial analysts Fitch Ratings concluded that state and local taxes could balloon to 45 percent for recreational marijuana in some communities.

"The existing black market for cannabis may prove formidable competitor to legal markets if new taxes lead to higher prices than available from illicit sources," the report warned.

Some predict that prices will eventually come down as the legal market matures.

Other states with legal recreational pot have restructured taxes over time.

Washington state, for example, initially imposed separate 25 percent taxes up to three times: when the grower sold it to the processor, when the processor sold it to the retailer and at the point of public sale. In 2015 that was pushed down to a 37 percent tax at the point of retail sale, plus sales tax. In Seattle, that combined rate is about 47 percent for recreational sales.

"While our members, like any other business sector, would like to see a lower tax rate, we have not seen any evidence that current tax rate is diverting people into the black market," Aaron Pickus, a spokesman for the Washington CannaBusiness Association, an industry group, said in an email.

There are other barriers to unregulated businesses entering the new system.

Nicole Howell Neubert, a marijuana industry lawyer, said a retail business could easily ring up $200,000 in permitting and other costs associated with compliance in the new legal market.

"When you add to that high tax rates, you increase the number of reasons why someone might not be able to become regulated," she said.

More than 130 countries have forged a deal on how big global companies are taxed.
Oct 11th, 2021
Follow Us
Most Recent