The lawsuit claims that the leading manufacturer of the devices misled federal authorities about their intended purpose.

Lisa Marie Pane
In this Oct. 4, 2017, file photo, shooting instructor Frankie McRae demonstrates the grip on an AR-15 rifle fitted with a "bump stock" at his 37 PSR Gun Club in Bunnlevel, N.C. The Brady Center to Prevent Gun Violence filed the lawsuit on Friday, Oct. 6, 2017, against the makers and sellers of “bump stocks,” which use the recoil of a semiautomatic rifle to let the finger "bump" the trigger, allowing the weapon to fire continuously. The devices were used by Stephen Paddock when he opened fire on a country music festival in Las Vegas, killing dozens of people.
AP Photo/Allen G. Breed, File

ATLANTA (AP) — One of the nation's leading gun-control groups has filed a lawsuit against the makers and sellers of "bump stocks," the devices used by the gunman in what is now the deadliest mass shooting in modern U.S. history.

The Brady Center to Prevent Gun Violence filed the lawsuit on behalf of victims of the Oct. 1 shooting in Las Vegas. The lawsuit claims that the leading manufacturer of the devices misled federal authorities about their intended purpose and marketed them to thrill-seeking gun enthusiasts who wanted the experience of firing a fully automatic weapon that is otherwise greatly restricted under federal law.

The lawsuit was filed Friday in Clark County District Court in Nevada; it has three named plaintiffs — all victims of the shooting — and seeks class-action status. It's not the first time that the Brady Center has filed a lawsuit after a high-profile shooting, seeking to hold gunmakers and others in the industry accountable.

Slide Fire Solutions, the Texas-based company that is considered the top manufacturer of "bump stocks" did not return an email message sent Tuesday through its Facebook page seeking comment. Its voicemail box was not accepting messages and the company has not commented since the shooting took place.

The devices were originally intended to help people with disabilities who have arm mobility issues fire a semi-automatic long gun. It replaces the stock and pistol grip and allows the weapon to fire continuously, mimicking a fully automatic firearm. Bump stocks were found among the weapons used by Stephen Paddock as he shot from a Las Vegas casino high-rise Oct. 1, killing 58 people at a concert and wounding hundreds.

Avery Gardiner, co-president of the Brady Center, told The Associated Press that assuring federal regulators reviewing the device that the bump stock was to help disabled gun owners was disingenuous and misleading. "But when they marketed it to the public, they said it's because fully automatic weapons are fun," Gardiner said.

"So what their product is designed to do is subvert federal law on machine guns, and that's irresponsible," she said.

The gun industry has broad protections from lawsuits. The Protection of Lawful Commerce in Arms Act was enacted in 2005, protecting gunmakers and dealers from being held liable whenever a crime is committed with a firearm.

However, in this case, Gardiner said, that liability wouldn't apply because Slide Fire manufactures neither firearms nor ammunition.

Since the shooting, a bipartisan mix of members of Congress have called for a ban on bump stocks, while the National Rifle Association has suggested the Federal Bureau of Alcohol, Tobacco, Firearms and Explosives should revisit the devices and determine if they should be subject to greater restrictions. The ATF ruled in 2010 that the devices were not subject to restrictions under either the Gun Control Act or the National Firearms Act, laws that restrict access to machine guns and silencers. 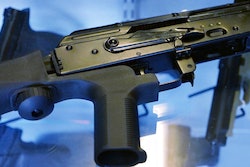 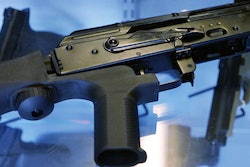 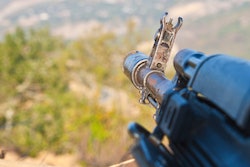