According to the IIHS, 301 of the 1,542 car occupants killed in collisions with a tractor-trailer in 2015 died when their vehicle struck the side of the rig. 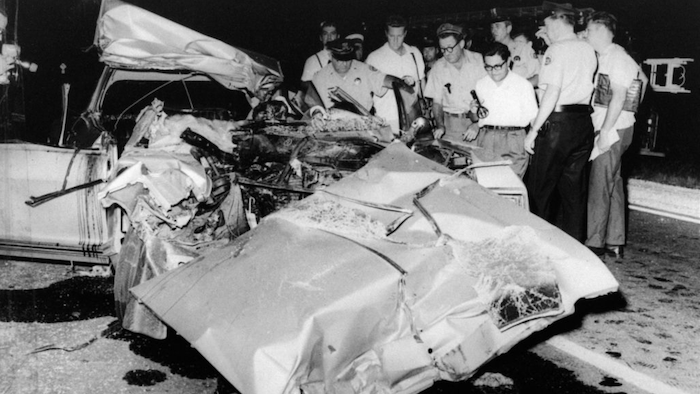 This June 29, 1967, file photo shows the mangled car that actress Jayne Mansfield died in after colliding with a truck, on Route 90 outside of New Orleans. Fifty years after Mansfield car slammed underneath a tractor-trailer, auto safety advocates say hundreds of similar deaths annually could be prevented by guard rails mounted beneath trucks. New York Sen. Charles Schumer has called on federal regulators to require truck underride guards after two cars skidded under a jackknifed milk tanker in northern New York earlier this month.
AP Photo/File

"We're asking Congress to pass a bill that would mandate comprehensive underride protection, not only on tractor-trailers but on single-unit trucks," such as dump trucks, said Marianne Karth, who lost two teenage daughters, AnnaLeah and Mary, when her Crown Victoria crashed beneath a tractor-trailer in Georgia in 2013.

After two cars skidded under a jackknifed milk tanker truck in northern New York on July 6, killing four people, U.S. Sen. Charles Schumer called on federal regulators to order big trucks to be equipped with side guards that would prevent cars from sliding beneath them in a crash.

"The devastation of crashes like these — a result of a gap in truck safety standards — could be reduced," Schumer, a Democrat, said.

According to the Insurance Institute for Highway Safety, 301 of the 1,542 car occupants killed in collisions with a tractor-trailer in 2015 died when their vehicle struck the side of the rig. Another 292 died when their vehicle struck the rear. The institute's researchers estimate that half the fatal crashes between large trucks and passenger vehicles involve underride, which makes air bags and other crash protection ineffective because the top half of the car is sheared off.

Under regulations enacted following Mansfield's death, big rigs are required to have rear underride guards to keep cars from traveling beneath the back of a trailer in a collision. Known as "Mansfield bars," they consist of two vertical steel bars supporting a horizontal bar less than 2 feet (61 centimeters) from the ground.

Side guards aren't required by federal regulations, but at least three cities — Boston, New York and Seattle — mandate them on city-owned trucks to eliminate deaths and injuries, particularly among pedestrians and bicyclists.

The Insurance Institute for Highway Safety says side guards could prevent hundreds of deaths per year in the U.S. This spring, the institute crashed a car into a trailer equipped with a side guard called AngelWing, a steel rail covered with fiberglass. The car's front end crumpled but the test dummy was protected by the air bags and seat belt. Without the guard, the passenger compartment was sheared off, causing devastating head injuries to the dummy.

Karth and Lois Durso, whose 26-year-old daughter Roya died in a side underride crash in Indiana in 2004, have been working together to lobby Congress and the Department of Transportation for a side guard requirement as well as stronger rear guards. Their proposed legislation has no sponsor yet.

"They talked about side underride protection in 1969, but nobody has pursued it relentlessly," Karth said. "I wish somebody would have done it so maybe our daughters would still be here."

Before it issued is last set of regulations for rear-impact guards in 1996, the National Highway Traffic Safety Administration said it had determined that side-underride countermeasures were not cost-effective.

The trucking industry supports other efforts to avoid crashes, such as automatic emergency braking and collision warning systems, said Sean McNally, spokesman for the American Trucking Associations. But the industry is looking to the National Highway Traffic Safety Administration to address questions about the effectiveness of side underride guards, he said.

The Truck Trailer Manufacturers Association said in comments submitted to the National Highway Traffic Safety Administration in May 2016 that there are no side impact guards commercially available for installation on trailers. The trade group said "customer demand is non-existent" due to the "relatively low frequency of side underride accidents," the significant added cost and weight per trailer for designs that had been evaluated, and "many unresolved technical challenges."

One consequence of adding the extra weight of side guards to trailers would be displacement of cargo onto additional trailers, which would add more heavy trucks to the highways and increase the risk of all types of accidents, said John Freiler, engineering manager of the manufacturers association.

In the northern New York crash, a milk tanker truck jackknifed across both lanes of Interstate 81 when the driver swerved to avoid hitting deer. Two cars skidded beneath and beyond the tanker, killing a doctor in one car and three workers riding in another car after their ambulance broke down.

R.B. Lawrence, owner of the ambulance company that lost three employees, said he'd like to see safety measures to prevent similar tragedies, but he's not sure if the best solution is underride guards or improved braking technology to prevent jackknife crashes.

"I'm all about saving lives," Lawrence said. "I'm just terribly upset by what happened. This has been an absolute nightmare."

Truck Side Guards Could Prevent Fatalities

Trucks Unsafe, Ordered Off the Road